Telefónica, world leader in the management of climate change according to the 2018 CDP A-List

Telefónica, world leader in the management of climate change according to the 2018 CDP A-List 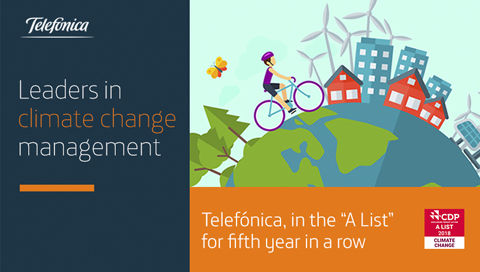 Madrid, 22 January de 2019.- Telefónica has been recognized as a leading global company in the fight against climate change and included, for the fifth consecutive year, in the “A-list”: https://www.cdp.net/en/scores drawn up by CDP, the non-profit organization that annually compiles and distributes this information to investors, corporations and governments.

CDP has highlighted the actions taken by the Telefónica in the last year to reduce the CO2 emissions, mitigate climate risks and help develop the low-carbon economy.

This ranking, drawn up at the request of more than 650 investors with assets worth 87 billion dollars, includes 6 “telcos” and 4 Spanish firms out of a total of 126 companies listed from  all over the world. The companies analyzed receive a rating from A to D, depending on the effectiveness with which they have addressed climate change. Those that do not provide information or provide insufficient information score an F.

“Managing climate change is a priority for Telefónica. More than 50% of the electricity the company uses today comes from renewable sources. We have stabilized our energy consumption despite traffic having increased by 107% in the last three years, improving our efficiency by 52%. And we have achieved all of this two financial years ahead of our planned goals. In other words, we are more efficient and we are also consuming increasingly greener energy each year”, explains Enrique Blanco, Global GCTIO at Telefónica, who recalls the commitment made by the company to lead the transformation of the network from copper to fibre, which represents an energy efficiency of more than 85%.

And that’s why Telefónica implemented its Energy Efficiency Programme, with 170 annual initiatives, and its Renewable Energy Plan, which has enabled using clean energy for more than 50% of electricity consumption. And the company is already 100% renewable in Germany, Brazil, Spain and the UK, approaching its goal of being renewable in all countries by 2030.

Telefónica has decreased its CO2 emissions by 28% in three years, with the commitment to cut them by 30% by 2020, to match the Paris Agreement.

Telefónica, the only Spanish Telco in the list, is working to have a more efficient telecommunications network in the market in terms of energy and CO2 and is helping develop a low-carbon economy with a more intensive use of digital solutions. These services allow reducing our customers’ emissions. Annually the company prevents more than 900,000 tons of CO2, which is equivalent to more than 70% of its own footprint. That’s how it is approaching carbon neutrality and continues to make progress towards the aim of preventing more emissions than those produced.

Paul Simpson, CEO of CDP, highlights the importance of acting against climate change because the severity of environmental risks for companies is becoming more evident. “The A-list companies are positioning themselves to offer solutions, take advantage of new market opportunities and thrive in the transition towards a sustainable economy. We need to urgently scale environmental actions at all levels to fulfil the Paris Agreement and the Sustainable Development Goals”.