Telefónica, the largest green issuer in the ICT sector

The Climate Bonds Initiative, a non-profit organisation that promotes large-scale investment for a low-carbon economy, has awarded Telefónica the prize for the Largest Green ICT issuer of 2019. 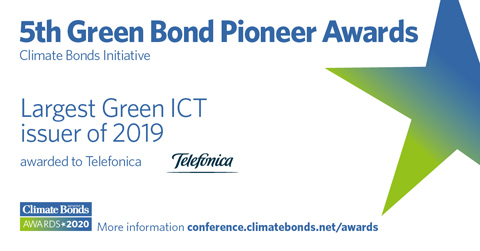 Madrid, 7th July 2020 – The Climate Bonds Initiative, a non-profit organisation that promotes large-scale investment for a low-carbon economy, has awarded Telefónica the prize for the Largest Green ICT issuer of 2019. This award is part of the 5th edition of the Green Bond Pioneer Awards.

The organisation recognises Telefónica’s green bond issue at the beginning of 2019, the first in the global telecommunications sector. The 1 billion euros of funds obtained will be used to finance projects aimed at increasing the company’s energy efficiency, mainly thanks to the process of transforming copper into optical fibre in Spain, which is 85% more energy efficient.

In January 2020, Telefónica also successfully closed the issue of its first green hybrid bond -the first in the sector worldwide- for an amount of 500 million euros. In addition to financing projects aimed at transforming copper into fibre in Spain, the hybrid bond funds will also be used to promote the self-generation of renewable energy.

Started in 2016, the Green Bond Pioneer Awards are sponsored by the Climate Bonds Initiative, with the collaboration of the London Stock Exchange Group. These awards are the main international recognition in green finance, by annually valuing the innovation and leadership of organizations that set an example in this field.

“The ICT sector is an enabler of the energy transition through digitalization. Green financing allows us to accelerate the transformation of our networks to reach net zero emissions. It is our responsibility because what goes through our networks is not just voice & data; is life & progress”, explained Elena Valderrábano, Director of Corporate Ethics and Sustainability, and Jesús Romero, Director of Finance, from Telefónica.

According to Sean Kidney, CEO of the Climate Bonds Initiative, “The 2020 Awards mirror a market that includes new nations & point to the role of those far-sighted institutions who’ve built the decade long foundations of green finance. The pace of investment from the last ten years must now accelerate in the next ten. A decisive shift of capital towards the green recovery, rapid transition, resilience & adaptation is required. We want future awards to be recognising the first trillion in annual climate investment & the policy makers, investors, banks & corporations that got us there in a hurry.”

On World Environment Day, Telefónica announced that it had advanced its goal of zero net emissions by 20 years, from 2050 to 2030 in its main operations. In the period 2016-2019, thanks to the shutdown of hundreds of thousands of elements and the closure of hundreds of copper plants, Telefónica has saved 346 GWh of energy with 93,297 tCO2 avoided, equal to the carbon captured by more than 1,543,000 trees.

On this low-carbon network, Telefónica offers digital Eco Smart services to help companies and administrations reduce their energy or water consumption and CO2 emissions, and boost the circular economy. Its aim is to contribute to a green and prosperous recovery for all through digitalisation.