Telefónica reports record net income of €7,743 million in the second quarter of 2021

The company closes a historic quarter that shows the results of its strategic plan execution and the positive effects of the management on the business. 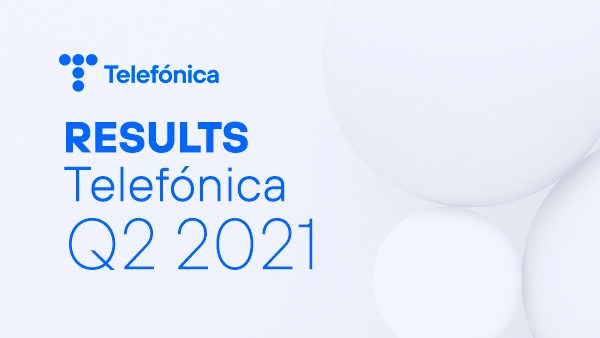 Madrid, 29th July 2021. Telefónica has posted a record net income of €7,743 million in the second quarter of 2021. This historic figure is the result of capital gains on the merger of O2 and Virgin Media in the UK and on the sale of the Telxius tower business. Both transactions are two of the major operations carried out to implement the action plan announced by the Group in 2019. At the same time, the figures reported in the first half of the year reflect the favourable effects achieved thanks to the management implemented, which are translating into a gradual return to growth and greater efficiency.

The closing of the mentioned two operations at the beginning of June was reflected in a net income of €8,629 million achieved in the first half of the year. This is also an unprecedented figure, the highest in Telefónica’s history.

The completion of these transactions also led to a historic reduction in the Group’s net financial debt, which ended June at €26.2 billion, 29.5% lower compared to June 2020. In the last five years, the company’s debt has been halved, from more than €52 billion in June 2016.

At the same time, capital gains from the operations have strengthened the Group’s balance sheet, which now has a more efficient capital structure that improves the quality of the company’s value, with an increase in equity of more than €10,000 million. Telefónica also has a solid liquidity position, which has increased to €26,924 million.

“These results show that Telefónica is on the right track, executing its strategic plan as a critical accelerator in the company’s transformation process. Telefónica is consolidating its leadership as a company that takes advantage of all the opportunities offered by the digital revolution, as a responsible, sustainable company that is always committed to operational excellence,” said Telefónica Chairman José María Álvarez-Pallete.

The favourable business performance in the first six months of the year and the positive outlook for the second half in Telefónica’s main markets have led the company to upgrade its financial targets for 2021. The company upgrades revenues and operating income before depreciation and amortisation (OIBDA) guidance from “stabilisation” to “stable to slight growth”. In addition, it maintains Capex to Sales target to back to normalised levels of up to 15%.

Telefónica confirms its shareholder remuneration for 2021 with a dividend of €0.30, which will be paid in two tranches, €0.15 next December and another €0.15 in June 2022, through a voluntary scrip dividend. The company has also announced that it will propose to the AGM the cancellation of the shares representing 0.7% of the share capital held as treasury stock on June 30th, 2021. 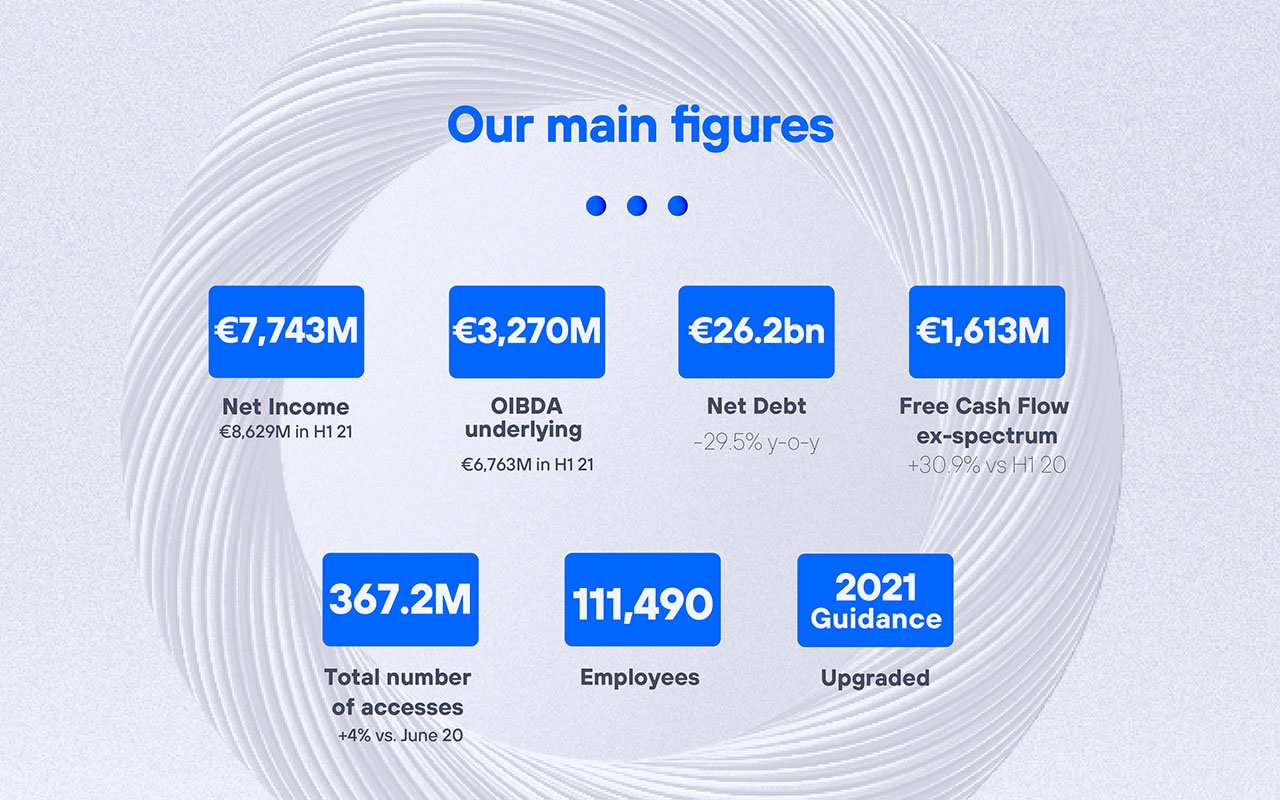 CapEx was in line with the normalisation envisaged in the 2021 targets, with a model based on greater efficiency and lower capital requirements. CapEx increased 12.8% in the second quarter compared to the same period of 2020 and 25% in the first half of the year.

Also noteworthy in the 2Q was the reduction of the negative impact of foreign exchange rates, mainly from Latin American currencies. The appreciation of the Brazilian real since April limited the impact of exchange rates on OIBDA to €78 million in the second quarter, well below the €288 million effect in the first three months of 2021.

Continuous execution of the strategic plan

With the UK and Telxius operations as key exponents, the Group has continued to make progress during the first half of 2021 in the execution of its strategic plan. Launched at the end of 2019 to set the path for the new Telefónica, the achievement of the objectives for which it was conceived is laying the foundations for the company’s long-term sustainable and profitable growth. 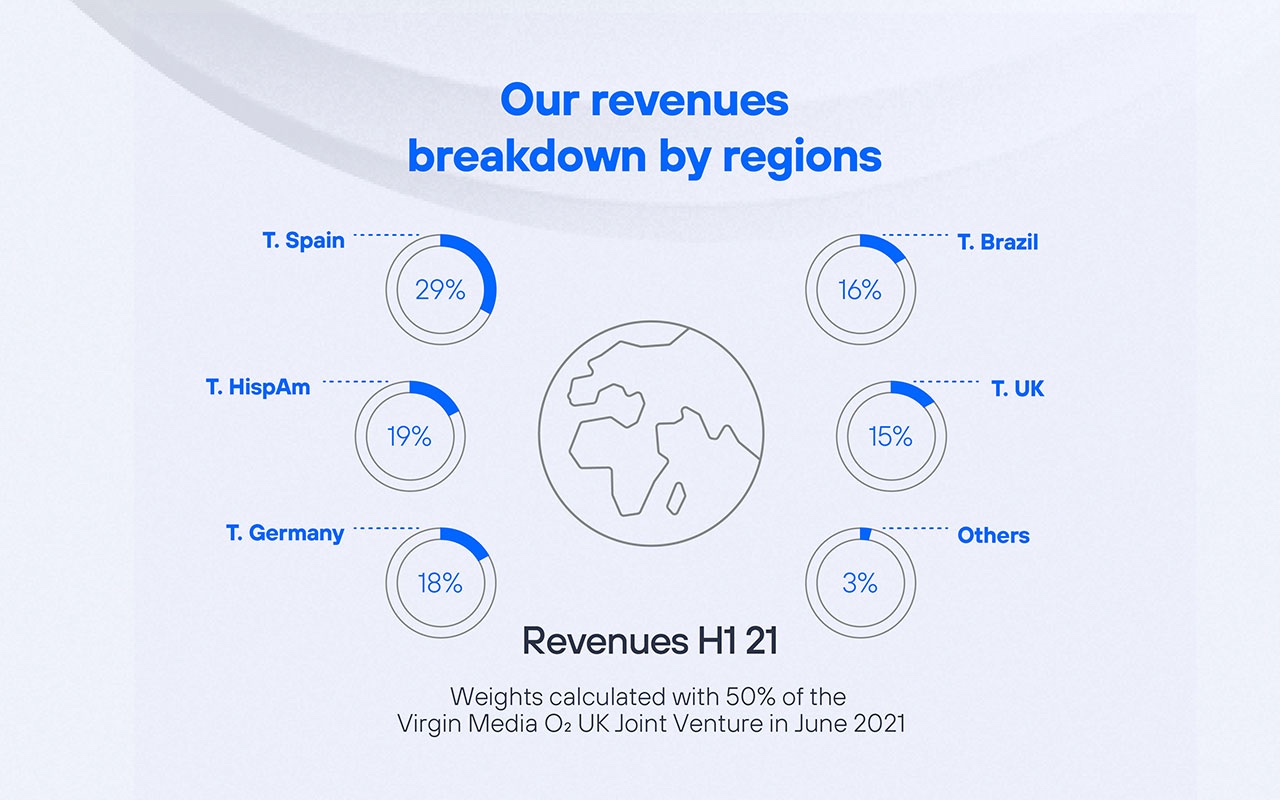 Regarding Telefónica’s four main markets, Spain has maintained its European leadership in fibre rollout, with more than 26 million premises passed, and 5G coverage now reaching more than 80% of the population. The result of the recent 5G auction, in which Telefónica obtained 20 MHz of spectrum in the 700 MHz frequency band for €310 million, will allow the company to consolidate its leadership in high strategic value connectivity.

UK welcomed the historic merger between O2 and Virgin Media to create a leading connectivity operator -VMED O2- without any conditions from the UK regulator. Germany showed commercial strength resulting in improved revenue and OIBDA growth. And Brazil also benefited from a boost in commercial activity, reflected in a return to OIBDA growth in the second quarter.

30% of debt in Latin American currencies

Hispam has also made significant progress to achieve lower capital exposure in the region, as shown by the vehicles created with KKR in Chile and Colombia to deploy fibre; by the generation of greater efficiencies; and by lowering risks through a higher proportion of debt in local currency. Specifically, debt denominated in Latin American currencies now accounts for 30% of the Group’s financial commitments, including leases, compared to 16% in June 2020 and 21% in March 2021. This evolution allows generating a natural hedge that reinforces the sustainability of the company’s financing structure. In addition, revenues improved significantly in the region in the second quarter, with organic growth in all markets.

Telefónica Tech continued to add assets to strengthen its position to accelerate growth, which remains strong. In the second quarter, this unit’s revenues grew to €203 million, 26.6% more than in the same period of 2020, and to a total of €369 million in the first half of the year, up 25.9%. In addition to the dynamism that Cybersecurity and Cloud services have been experiencing in recent months, higher growth rates have been added in the Big Data and IoT areas, a combination that has allowed Tech to grow above the sector average and, therefore, to gain market share.

Telefónica Infra has extended its sequence of transactions with the launch of FiBrasil, a company owned 50% by CDPQ and Telefónica Group (25% Infra and 25% Telefónica Brasil) to deploy fibre in Brazil, which has already started operations. This vehicle, together with the creation last year of UGG in Germany, gives Infra an increasingly important role in providing more inclusive connectivity. In addition, Telxius, 50.01% owned by Infra, has strengthened its international network with Tannat, a new generation submarine cable connecting Brazil to Argentina with its 2,000 kilometres in length.

In the first half of 2021 Telefónica continued to attract and retain high value customers. At the end of June, the Group had 367.2 million accesses, including 100% of VMED O2 accesses, 3.7% more than a year earlier. The company’s high-speed network (fibre and cable) reached 154.7 million premises passed, up 6%, of which 80m premises are on the Group’s own network, 10% more than a year earlier.

The Group’s digital transformation continues to play a key role in improving customer experience and service quality, as well as driving efficiencies. By June 2021,

Telefónica’s digitised business processes accounted for 79% of total processes, an increase of 2 percentage points year-on-year, and are managed in real time, enabling a more agile service to customers.

A more connected and sustainable future

The results for the first half of the year also demonstrate the Group’s commitment to building a more connected and sustainable future through digitalisation. The company continues to work to ensure that the benefits of digital transformation reach everyone through high-quality, secure and low-carbon connectivity.

The transformative power of digitalisation is fundamental in the so-called Decade of Action, the time remaining to make the Sustainable Development Goals a reality. Telefónica has integrated the goals of the United Nations SDGs into its strategy and measured the impact of its activity in the report ‘A sustainable world, a connected world’.

In recent months, Telefónica has continued to advance and make even more visible its commitment to sustainability and the decarbonisation of the economy. To this end, it has adopted environmental, labour, educational and diversity initiatives within the three pillars that underpin the company’s strategy in this area, consisting of building a greener future, leading by example and helping society to thrive.