Telefónica reports a record net income of €9,335 million up to September and confirms its financial targets for the year

• The company continues to execute the strategic plan announced two years ago with the development of several fibre vehicles, the growth through acquisitions of Telefónica Tech or the progress derived from the management to reduce the exposure in Hispam.
• Telefónica achieved a net income of €706 million in a third quarter in which the Group's revenues reached €9,298 million.
• Revenues and OIBDA grew simultaneously in organic terms for the second consecutive quarter.
• The Group's net financial debt fell to €25,000 million at the end of September, 31.8% less vs. September 2020.
• Telefónica's Chairman, José María Álvarez-Pallete, stressed that "Telefónica's performance has been solid" and underlined that "these results reflect a further significant step towards economic and social recovery of the markets in which the company operates".

Madrid, 4 November 2021. Telefónica has obtained a record net income of €9,335 million in the first nine months of the year, as a result of capital gains from the closing of the merger between O2 and Virgin Media in the United Kingdom and the sale of Telxius towers. Net income from July to September amounted to €706 million. Additionally, the results for the quarter show organic growth in revenues and operating income before depreciation and amortization (OIBDA) and a successful capital management, prioritizing investment in the most relevant markets and businesses for the company, with a focus on long-term growth and profitability. Thanks to the results achieved in the first nine months of the year, the company confirms the financial targets set for the year, i.e. revenue and OIBDA to move between stable and slight organic growth, and CapEx to Sales back to a normalised level of up to 15%. 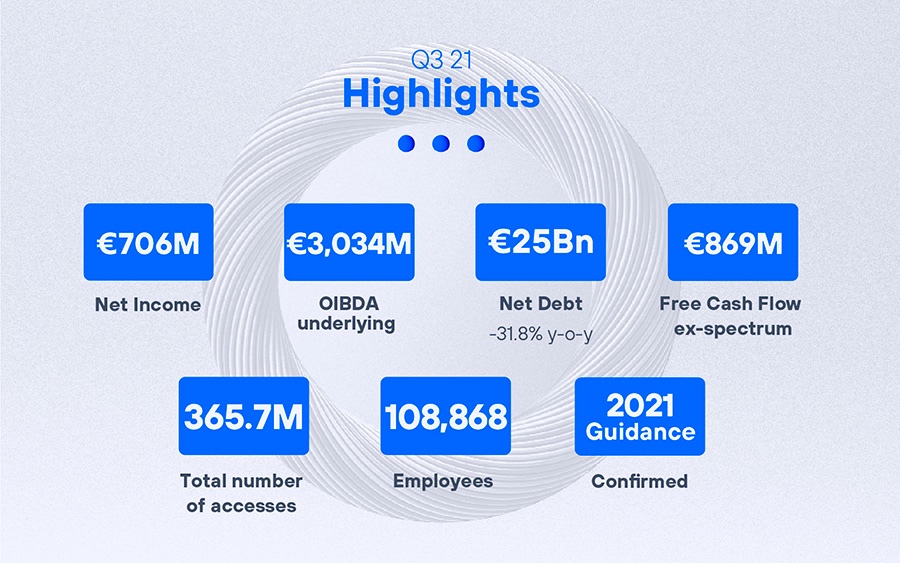 Nearly two years after it was presented, Telefónica’ strategic plan continues to bear fruit. In addition to moving towards a more sustainable operating model the Group has also made progress in the development of fibre vehicles in several countries through Telefónica Infra; in the growth story of Telefónica Tech with acquisitions such as Cancom UK&I, in the UK, and with revenues increasing by 25.5% in the first nine months of 2021, to €598 million; and in achieving a more favourable and efficient operational and financial exposure in Hispam, following the closing of the sale of Costa Rica and the agreement for the sale of the business in El Salvador.

José María Álvarez-Pallete, Chairman and CEO of Telefónica, said: “Telefonica performed strongly in Q3. We maintained the momentum of y-o-y organic revenue and OIBDA growth for the second consecutive quarter, with accelerating service and B2B revenue growth”. He also explained: “These results reflect a further significant step towards the economic and social recovery of the markets in which we operate as the world continues to emerge from the worst effects of the pandemic. I am proud of Telefonica’s role in helping society to thrive and to build a greener future through digitisation.”

On track to meet 2021 guidance

Between July and September, and for the second consecutive quarter, both revenues and OIBDA grew by 3.6% and 1.6%, respectively, in organic terms, while in the first nine months of the year both figures grew by 1.7%. Both variables are on track to meet the targets set for 2021.

In reported terms, revenues amounted to €9,298 million in the quarter, down 11.1%, and to €29,603 million in the first nine months, down 8%, mainly as a result of changes in the company’s perimeter. The weight of revenues associated with broadband connectivity, together with services over connectivity, increased by 3.8 percentage points in the last year, to 71% of total service revenues. 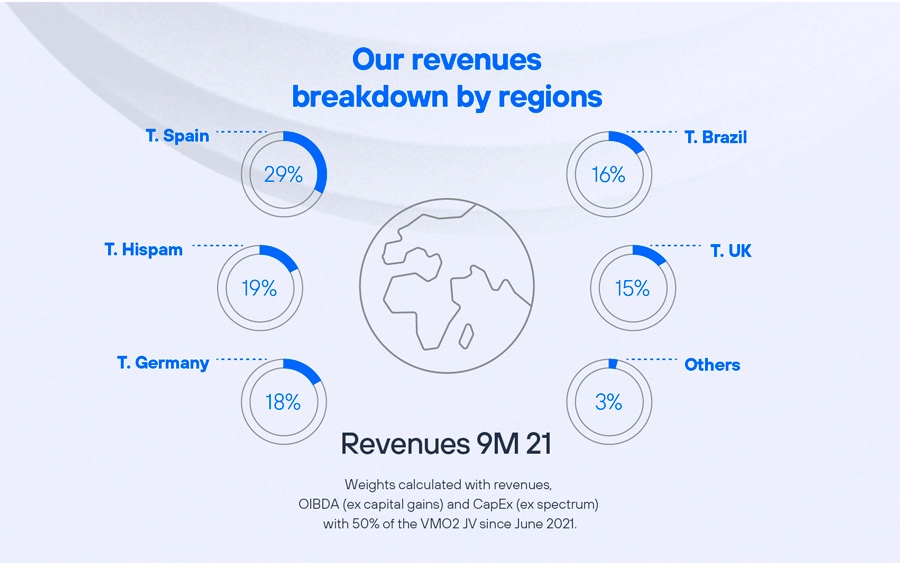 OIBDA grew 39.8% in the quarter in reported terms to €3,734 million and more than doubled in the first nine months to €20,620 million. This increase is mainly due to the capital gains from the operations closed during 2021, but also benefits from the efficiencies and cost control achieved thanks to the management applied.

By markets, the Group’s four main markets –Spain, Germany, Brazil and the United Kingdom– account for 78% of revenues. Specifically, Spain contributed 29%, Germany 18%, Brazil 16% and the UK 15%. Hispam contributes 19% of revenues.

Investment increased by 10.9% in the quarter, to €1,493 million, and by 20.3% through September, to €4,893 million, with the focus on capturing growth opportunities. Around 45% of the investment is allocated to the deployment and development of ultrafast networks, i.e. fibre and 5G. Excluding spectrum, CapEx stood at €3,904 million up to September, a figure equivalent to 13.2% of revenues, which is also on track to meet the financial targets for the year.

Telefónica maintains its leadership in fibre, both in Europe and Latin America, with a total of 156.6 million premises passed, of which 82 million were own network. The Group’s total access base grew 3% year-on-year to 365.7 million. The company thus strengthens its competitive advantage and the sustainability of its operating model by relying on the three pillars of its network strategy: the continued evolution of an excellent fibre and 5G network, the development of open networks and the virtualization of the network architecture.

The extensive fibre network is key to guaranteeing excellent connectivity and facilitating digitalisation and, by extension, social progress. At Telefónica, the digitisation of processes has now reached 79% of the total, with real-time management that enables a more agile customer service to be provided.

Telefónica maintains a solid liquidity position amounting to €22,606 million at the end of the quarter, which allows it to cover its debt maturities beyond 2024. Since January, the company has refinanced a total of €5,407 million and has extended the average maturity of its debt to 13.85 years, compared to 10.79 years last December.

Along with Telefónica’s commitment to sustainability and network quality, during the third quarter the company has achieved several milestones that have allowed it to progress, in the execution of its ESG strategy, with digitalisation as the basis. Regarding environmental issues (E), aimed at building a greener future, in recent months Telefónica has passed the threshold of 1,000 copper plants closed in Spain since 2016.

With regard to social commitment (S), aimed at helping society to prosper, during the third quarter the Group made progress in connectivity in rural areas, ProFuturo became the first project in Spain to receive the WISE Prize for educational innovation and more than 25,000 employees participated in 300 initiatives on Telefónica’s International Volunteer Day.

In terms of corporate governance (G), and with the aim of leading by example, the company has received awards for its achievements in diversity in countries such as Chile and Peru, recognitions that demonstrate the company’s commitment to maintaining the trust of its stakeholders – customers, employees, suppliers and shareholders – in terms of diversity, quality and good governance.