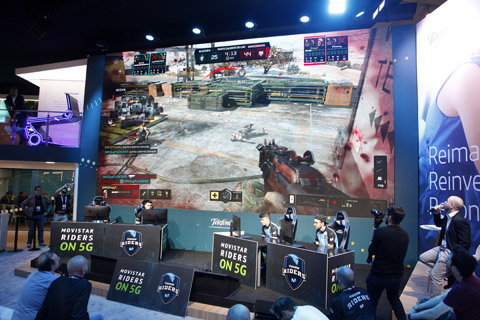 During the demonstration, Alejandro “Puni” Navarro, Enrique “Katru” Lapina, Daniel “Oney” Flórez, and Samuel “Sammy” Mateos, members of the Movistar Riders Call of Duty professional team, shared the experience of playing on a 5G network the video game Call of Duty: Black Ops 4, one of the most popular and dynamic shooter games on the market where low latency is fundamental to be able to kill the enemy and win the game.

Currently, Movistar Riders eSports competitions participation require a set-up that involves the latest generation fibre connections, computers, controls, peripherals, and special screens with an immediate response capacity. Applying 5G connectivity to the field of eSports will mean they  won’t have to necessarily rely on a fibre installation in order to hold a championship. It also gives gamers, in general, the flexibility to play demanding games that require low latency anywhere on mobile networks

During the presentation, the team used gaming consoles and a 5G router connected to the Internet through Ericsson’s 5G mobile network.

The ultimate goal of 5G networks is to achieve communications with latencies of between one and five milliseconds, which will not only minimise the response time between the player’s action and the effect in the video game, but will also bring other types of advantages such as the possibility of transferring the entire necessary computing capacity into the cloud, making it possible for future game devices to be simpler and lighter.

This will be particularly relevant in Virtual Reality and Augmented Reality (VR & AR) gaming. By transferring the complex graphical computations for these types of games to the network’s edge (Edge Computing),  wireless VR goggles will be lighter and simpler but capable of being used for the most demanding games, thus contributing to the generalisation of Network VR&AR games.

Telefónica is aiming for the use of 5G in eSports to contribute to the development and professionalisation of the players’ ecosystem, the sector and clubs. In Latin America, Telefónica’s commitment to eSports was reaffirmed last January with the start of the new Latin American Movistar League for League of Legends, and the formation of its three professional teams: Kaos Latin Gamers (KLG) in Chile, VIVO Keyd in Brazil, and Movistar Riders in Spain.

According to a recent study by the company Newzoo, video games are the main engine of global entertainment and generated 134.9 billion dollars in 2018, a +10.9% increase versus the previous year. In Spain, it amounted to nearly 2 billion Euros, and is now the fourth market in Europe and ninth in the world.  Latin America already represents 4% of the world market, with a total of 4.3 billion generated by video games. With the arrival of 5G to the sector, mobile gaming will become a radical change to the gaming ecosystem, according to experts from the study. Today, visitors in Telefónica’s booth had the possibility to enjoy a first taste of it at MWC19.