- With this alliance, Open Future_ expands its international innovation and entrepreneurship network to South Korea, increasing its total reach to 18 countries - The agreement aims to create business development and investment opportunities for both operators and startups 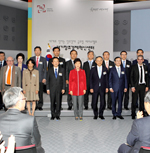 – With this alliance, Open Future_ expands its international innovation and entrepreneurship network to South Korea, increasing its total reach to 18 countries
– The agreement aims to create business development and investment opportunities for both operators and startups

This partnership, which sees the mutual sharing of entrepreneurial, investment and external innovation expertise, follows the launch of a program by the South Korean government to promote innovation across the country. Telefónica Open Future_, the open innovation network of Telefónica, will join forces with Korea Telecom and G-CEIC to boost the program in the Gyeonggi province, near the country’s capital, Seoul, which is one of the most developed areas in South Korea when it comes to ICT.

The agreement opens up new opportunities for existing Open Future_ and Korean startups to access new markets and enjoy multiple services such as workspaces present in established Open Future_ centers and also a new innovation center created by the South Korean Government and Korea Telecom. The startups selected by this program will also have access to support from each of the partners to aid with commercial development and will be able to take advantage of the Telefónica and South Korean Government’s investment vehicles.

Through this collaboration agreement Telefónica Open Future_ has established a strong link with South Korea – one of the world’s most technologically advanced countries. The South Korean government recently launched a major new initiative in partnership with leading Korean companies to accelerate entrepreneurship. This initiative is primarily focused on startups that are making the most of new technologies and are aiming expand internationally. The agreement with Korea Telekom and Telefónica Open Future is part of this initiative.

For Telefónica Open Future_ the signing of this agreement represents an extension of its  footprint in Asia where it has already formed an alliance with China Unicom and Tsinghua Holdings. Telefónica’s open innovation programme currently reaches 18 countries and has, to date, committed over 310 million euros across 500 companies creating more than 5,000 jobs.

Open Future_ Telefónica is a global, open program designed to connect entrepreneurs, startups, investors and public and private organizations worldwide. Its goal is to guide innovation towards the development of viable projects, using a model that gives visibility to the talent and connect with organizations, investors and businesses.

KT (Korea Telecom) is the major telecommunication company in Korea, which has the largest number of All IP subscribers in Korea: Mobile, Internet, IPTV, VOIP. It is leading the development of the information and communications industries of Korea since its foundation in 1981.

G-CEIC (Gyeonggi-Creative Economy Innovation Center) is an innovation center for start-ups, ventures, and SMEs. The Gyeonggi regional government and KT in collaboration have built G-CEIC with the support from Korean central government in Pan-gyo, Gyeonggi Province. G-CEIC not only supports start-ups by providing workspace and acceleration programs, but also assists ventures and SMEs to develop new markets and businesses.

G-CEIC focuses on supporting start-ups in the industry of game, fintech, IoT, and 5G. G-CEIC provides specialized test-bed and professional mentoring programs to the start-ups. And through a partnership with global accelerators such as Telefónica Open Future, G-CEIC helps start-ups to venture into international markets.