- Telefónica and BQ are supporting this Android-based operating system that offers a richer experience, a more customisable interface and higher levels of privacy and security  - Movistar...

– Telefónica and BQ are supporting this Android-based operating system that offers a richer experience, a more customisable interface and higher levels of privacy and security
– Movistar will introduce the new Aquaris X 5 with Cyanogen 12.1 into its portfolio
– The two companies began collaborating with the launch of Aquaris M5 and plan to continue working together in the coming months 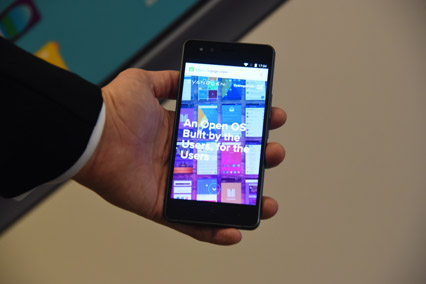 Madrid, November 11, 2015 -Telefónica and BQ have worked together over the past months to bring Europe its first terminal with Cyanogen OS, an Android-based operating system that offers a more customisable interface and higher levels of privacy and security. This collaboration makes Telefónica the first operator ever to launch a device with Cyanogen OS in Europe.

Both Spanish companies have always sought to add more options to the range of operating systems from which the user can choose – making it as broad as possible, balancing supply and promoting competitiveness. As a result of this commitment, both have opted for Cyanogen OS.  In fact, last March, Telefónica Ventures, one of the investment vehicles integrated into Telefónica Open Future, participated in a round of series C investment in Cyanogen.

Cyanogen OS is an Android-based operating system.  It is fully compatible with all Google Play applications, it allows further customisation of the interface and provides extra features, not only in terms of privacy and security but also related to the handling of the smartphone.

The latest Cyanogen 12.1 version introduces additional features, such as LiveDisplay, which automatically adjusts the display settings according to lighting conditions and the time of the day.  It also comes with a new browser offering a lighter, safer and faster experience than other browsers on the market.

The first handsets with Cyanogen OS launched in Spain today, and will arrive in Germany and the United Kingdom in the coming weeks. Throughout 2016, Telefónica will bring these devices to other countries in which it operates.

The first will be Aquaris X5, which will be available through the Movistar commercial network in Spain from November 11 for 209 euros (VAT included). Movistar customers can finance it up to 24 months interest-free for a subscription fee costing as little as 8.7 Euro.

Aquaris X 5 is a next-generation five-inch smartphone, featuring 4G connectivity, Qualcomm ® Snapdragon ™ 412 processor, 2 GB of RAM and 16 GB of internal memory expandable via SD card. It has a 2.900mAh battery, which, thanks to operating system optimisation and low-power components, provides a longer battery life than other smartphones with similar specifications. Also it includes excellent 13MP cameras at the rear and 5MP at the front, both with flash.

BQ is a leading technology company in Europe Its aim is to help people understand technology, encourage them to use it and inspire them to create it. To achieve this, it has committed to education in technology, DIY philosophy and Open Source. BQ applied this philosophy to their products (smartphones, 3D printers or robotics, among others) and its software solutions, working to make technology a tool that improves the world and the lives of their users.

Cyanogen is re-imagining the world of mobile phones, returning the power to customise handsets and its content to its customers. The CYANOGEN ® operating system is based on Android and is known for its revolutionary customisation, its intuitive interface, its speed, its improved battery life as well as its security. With a fledging user base and a vibrant community of developers, Cyanogen is connecting smartly connecting users of smartphones and tablets to people, applications and other things that they like. For more information, visit the website, Google +, Twitter, or Cyanogen’s Facebook page