- The company is in second place worldwide in the Telco industry with 99A points, alongside LG Uplus, Telenor, Belgacom and Deutsche Telekom. Madrid, 4 November 2015.  For the... 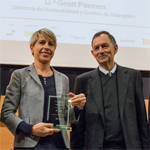 – The company is in second place worldwide in the Telco industry with 99A points, alongside LG Uplus, Telenor, Belgacom and Deutsche Telekom. 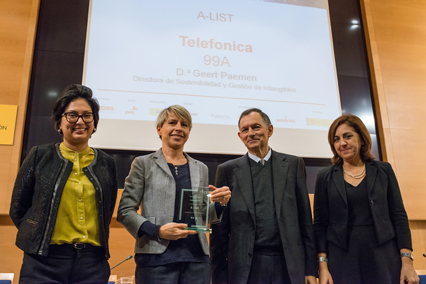 Madrid, 4 November 2015.  For the second year running, Telefónica has made the “Climate A List” of leading companies for its strategy, transparent management and initiatives in response to climate change, according to CDP, the not-for-profit organisation that compiles and distributes this information to investors, corporations and governments, annually. The company is the only Spanish Telco on the edition of the CDP’s A List for the Iberian Peninsula.

In effect, Telefónica has obtained the second best score for Telcos worldwide with 99A points, one more than the previous year and the same as South Korea’s LG Uplus, Telenor, Belgacom and Deutsche Telekom.

Thousands of companies provide information every year to the CDP for their independent evaluation, but only 5% manage to make the list.

In the opinion of Geert Paemen, Director of Sustainability and Management of Intangibles at Telefónica, who has received from Diana Guzman, CDP’s Director for Southern Europe, the distinction that this agency gives to those on the “A List”: “This ranking gives recognition to the responsible and transparent management of the risks and opportunities associated with climate change. And it encourages us to continue to foster our energy efficiency and to provide new services that help other sectors to be more efficient.”

In the opinion of Paul Dickinson, Executive Chairman and Co-founder of the CDP, “The influence of corporations is powerful. I congratulate the companies on the ‘A List’ for their leadership, by means of which they lead the way to achieving a low carbon future. The positive effect business action is having on climate change suggests that we are approaching a turning point, where companies are about to reach their full potential. They need an ambitious policy both nationally and internationally to support them in this regard and catalyse the participation of industry on a larger scale.”

The “Climate A List”, this year made up of 113 entities, has been published three weeks before the COP21, the United Nations conference whose aim is to achieve a global agreement which will enable the reduction of emissions and limit rises in temperature.

Telefónica carried out 157 energy efficiency projects between 2010 and 2014, with which it managed to save around 329GWh, the energy equivalent to that consumed by 33,000 homes in a year, with a value of 41 million euros in annual electricity costs.

These figures, verified by an independent entity, are the result of a process in which the company performs an annual analysis of energy consumption and calculates its overall carbon footprint, according to a model based on the GHG Protocol, ISO 14064 and the recommendation of ITU-T L.1420.

Furthermore, Telefónica has promoted the use of renewable energy, which currently represents 15% of its consumption.

As regards the commercial side of things, the company continues to strengthen its service provision so that companies and cities can improve their energy efficiency and their impact on the environment.