• Telefónica's growth accelerated in a first quarter driven by the increase of revenues in all the countries where the company operates, with double digit increases in Brazil and Hispam and also growth in Germany, the UK and Spain, and by the continued execution of a strategy focused on value creation.
• The company is on track to meet its full-year targets, with organic growth in revenues (+3.2%) and OIBDA (+2.1%) in the first three months of 2022.
• The Group overcomes the current scenario of inflationary pressure supported by revenue growth, efficiencies of the new operating model and favourable exchange rate performance.
• Telefónica has covered maturities beyond 2024, it has more than 80% of its debt at a fixed rate and the average debt maturity reaches 12.9 years.
• Telefónica Tech accelerates its growth with revenues reaching €299 million, 80.6% more than in the first quarter of 2021.
• "Telefónica's solid start to the year against a backdrop of inflationary tensions and geopolitical instability is evidence of the company's strength in facing the most adverse situations. Once again, it confirms that the Group's strategic plan is right and represents a valid and robust roadmap to continue providing the best service to our customers," said José María Álvarez-Pallete, Chairman and CEO of the company.

Madrid, 12th May 2022. Telefónica has accelerated its growth in the first quarter of 2022, reporting an increase in revenues in all the markets of the company in reported terms, and a net income of €706 million.

In the first three months of the year, the company also made progress in the execution of its strategic plan, with the achievement of new milestones aimed at value creation. Of particular note in this area was the completion of the acquisition of Oi’s mobile assets in Brazil, which will generate synergies of around €1,000 million. Also noteworthy were the agreements reached in Spain with respect to LaLiga, with a 15% lower net costs following the agreement with DAZN; the improvement of the network in Germany; the progress in the process of creating fibre vehicles in Spain and the UK; and the acquisition of the British company Incremental by Telefónica Tech, followed by the purchase of BE-terna.

“Telefónica’s solid start to the year against a backdrop of inflationary tensions and geopolitical instability is evidence of the company’s strength in facing the most adverse situations. Once again, it confirms that the Group’s strategic plan is right and represents a valid and robust roadmap to continue providing the best service to our customers,” said José María Álvarez-Pallete, Chairman and CEO of Telefónica.

“During the first quarter we have continued to fulfil our strategy, focused on value creation. The successful closing of the Oi deal in Brazil and the agreement signed with DAZN for the LaLiga rights show that Telefónica never rests in the execution of its strategic plan,” said the company’s COO, Ángel Vilá. Laura Abasolo, Chief Financial and Control Officer & Head of Telefonica Hispam, highlights “the robust start to the year, with widespread organic growth and solid free cash flow generation”. 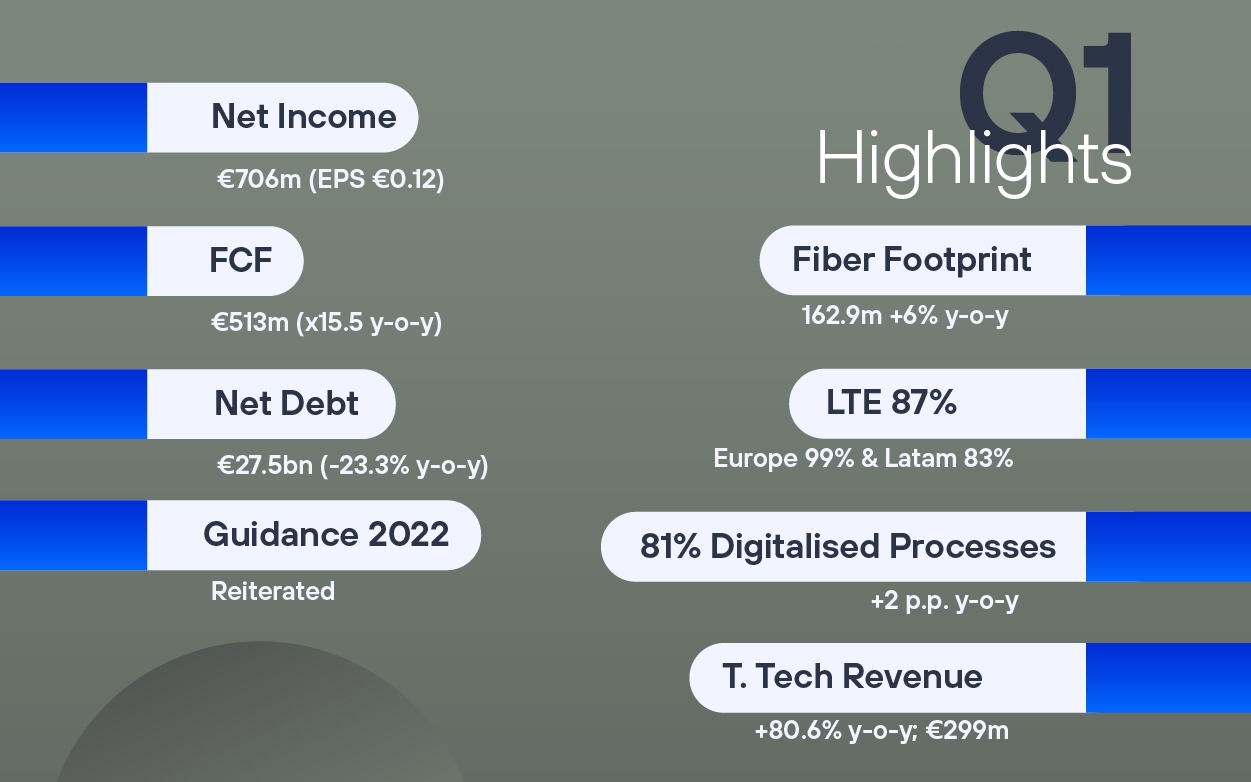 In this context of compliance and execution of the strategic plan, Telefónica has shown progress in relation to the digitisation of the business model -with 81% of processes already digitised- with the aim of continuing to leverage technology and efficiency to make further progress in this direction.

Revenues: growth in all countries

Revenues for the first quarter reached €10,883 million, aggregating 50% of VMO2 JV created in the UK, representing growth of 3.2% compared to the same period in 2021.

In reported terms, revenue growth has spread across all markets in which the group operates, with double-digit increases in Brazil (+18.1%) and Hispam (+10.9%), for a total of €9,410 million. Of these revenues, 73% now come from broadband connectivity and digital services, up 2.1 percentage points compared to the same period in 2021.

For the first time in recent years, the favourable evolution of exchange rates had a positive effect on both revenues and OIBDA in the same quarter, with a contribution of €242 million in revenues and €95 million in operating income before depreciation and amortisation. 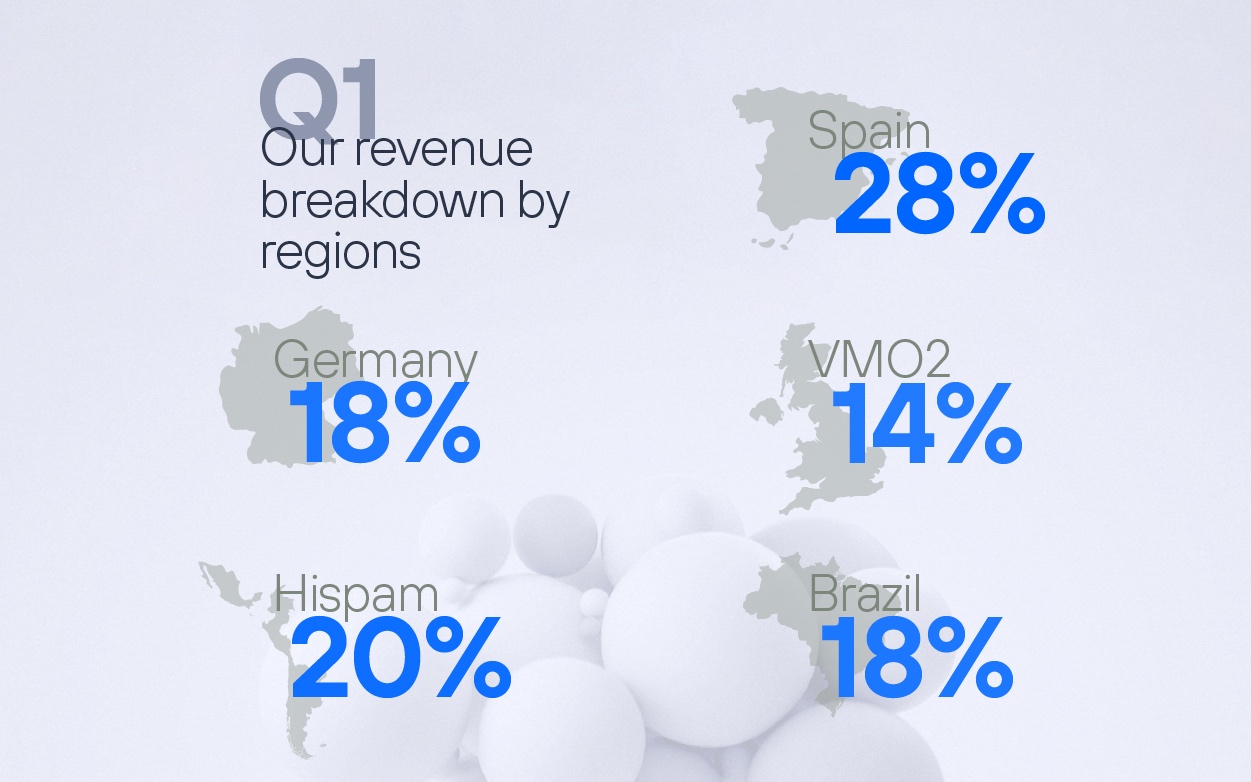 The growth in both revenues and OIBDA is on track to meet the financial targets set by the company for the full year, which are to achieve low single digit growth in both items organically. The same applies to the CapEx to sales ratio, which stood at 12%, compared to the annual target of 15%.

Telefónica Tech has accelerated its growth in the first three months of 2022. Revenues increased 80.6% year-on-year to €299 million, thanks to the good performance of all areas and the integration of operations over the course of 2021.

At Telefonica Infra, the company made progress in the quarter in the process of creating fibre vehicles in Spain and the UK, with ongoing conversations with potential investors, and closed the alliance with Pontegadea in Telxius, following the sale of KKR’s stake.

During the first three months of the year, Telefónica reported free cash flow generation of €513 million including leases, 15.5 times more than in the first quarter of 2021 due to the spectrum auctions faced during the first months of last year.

At the end of the first quarter, Telefónica’s solid financial position enabled it to face the current scenario of inflationary pressures and rising interest rates, a position that also benefits from the efficiencies derived from the new business model. Despite inflationary pressure in all regions where the company operates, both revenues and OIBDA have grown sequentially in all of them, and 80% of revenue base has tariff mechanisms as protection against this effect. In addition, Telefónica has decades of experience in high-inflation markets.

At the end of the first quarter, net financial debt had fallen to €27,453 million, 23.3% less than in March 2021. Out of the total debt, more than 80% is at a fixed rate, so the company is protected against the possible increase in financing costs, and the average life of the debt is 12.9 years.

In addition, Telefónica has a significant liquidity position of €22,302 million and has debt maturities covered beyond 2024.

The Telefónica Group’s access base stood at 368.3 million at the end of March, 1.1% more than a year earlier. Fibre customers grew by 20% and mobile contract customers by 4.3% compared to March 2021.

The company continues to focus on fibre deployment and the development of sustainable, open and virtualised technologies. At the end of March, Telefónica maintained its leadership position in terms of the number of premises passed with fibre, increasing its presence by 6% to a total of 162.9 million premises, of which around 85 million are passed through Telefónica’s own network.

In terms of 5G technology, Telefónica offers coverage in more than 400 UK cities/towns, around 250 German cities and 21 Brazilian cities, while in Spain it covers approximately 82% of the population. In addition, the roll-out of 5G stand-alone technology continues, following the acquisition of spectrum in Spain, the UK and Brazil in 2021.

ESG and solidarity with Ukraine

Telefónica’s sustainability objectives, integrated into the company’s business strategy and aligned with the United Nations SDGs, have advanced in the quarter with milestones such as the boost given to the Innovation and Talent Hub by the opening of the new Universitas campus, Telefónica’s firm commitment to employability and digital training, as well as the three WDA mentions received in recognition of transparency in the management of information regarding employees of the company and the value chain.

Telefónica’s ESG objectives are tangible. The company aims to achieve net zero emissions by 2040, with interim deadline of 2025 in main markets (Scope 1+2), and to be a Zero Waste company by 2030. It is also to achieve 90-97% mobile broadband coverage in rural areas of Spain, Brazil and Germany by 2024; to have 33% female executives by 2024; and to eliminate gender pay gap by 2050. Equally tangible is the objective of financing more than €10,000 million under sustainability criteria in the coming years; achieving gender parity in the company’s main governing bodies by 2030; and maintaining a policy of “zero tolerance” of corruption.

Telefónica and Fundación Telefónica have also shown their solidarity with Ukraine in the quarter with aid aimed at those living in Ukraine, at people who have friends and family there and at all those seeking protection in other countries. The initiatives have been articulated through monetary donations and free telecommunications services (calls, roaming or SMS), and by employees, volunteers and organisations in the different countries in which the company operates.