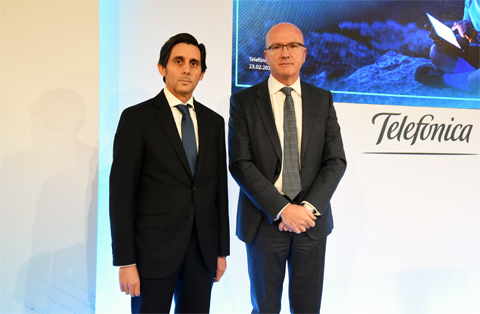 The organic growth of the business translates into healthy cash generation, with an annual free cash flow totalling 4,370 million euros (+24.4%).

With organic growth rates consolidating the current positive trend, the figures published today reflect a strengthened competitive position, due to the company’s differential infrastructure and the investment undertaken. The company has once again reported extremely high investment figures, up 8,928 million euros on 2016, chiefly assigned to the deployment of ultra-fast networks. At the end of the year, Telefónica had 39.2 premises passed with FTTx and cable, and 62% LTE coverage (87% of the total in Europe).

The quality of the customer base also continued to improve in 2016, in such a way that revenues rose by an organic 1.3% (by 2.7% in the quarter) to 52,036 million euros. We should highlight service revenues, whose year-on-year growth rose by 3.7%. The increase in OIBDA, although affected by the above-mentioned extraordinary factors, accelerated during the quarter, by up to 4 times in reported terms compared with the figure obtained in the last quarter of 2015 and by 9.4% more in organic terms. The organic growth for the year as a whole stood at 4.7%, with a total of 15,118 million euros. In underlying terms, the figure reached 16,519 million euros.

On the other hand, as of December 2016, Telefónica Group total accesses increased by 1% year-on-year to 350.0 million, with continued customer quality improvement. Thus, unitary customer value improved in the fourth quarter: both due to average revenue per customer growth, accelerating year-on-year to 4.4%, and churn improvement (-0.5 percentage points year-on-year). Growing demand for data, speed and content was reflected in the strong growth of high value services: LTE customers stood at 66.3 million (1.8 times vs. the previous year), with net additions in the quarter +25% year-on-year; mobile contract accesses and smartphones grow +6% and 17% year-on-year, respectively;  FTTx and cable customers grew by 24% vs. 2015 and pay TV accesses reached 8.3 million with a penetration of 48%.

Before analysing the results, the negative impact arising from the evolution of exchange rates continued to diminish; in the fourth quarter, it deducted 3.2 percentage points from year-on-year revenue change, -8.0 percentage points in 2016. At OIBDA level, the impact in the year was -8.8 percentage points and its negative impact was also reduced significantly in the fourth quarter (-94 million euros; -187 million in the previous quarter; -885 million in the first six months). Nevertheless, it is important to highlight that currency depreciations had a limited impact in terms of cash generation, since depreciations also decreased payments in euros related to investments, taxes, interest and minorities, almost entirely offsetting the negative impact at OIBDA level in 2016.

By services, in January-December 2016, broadband revenues accelerated their year-on-year organic growth to 16.1%, services over connectivity grew by 7.7% and voice and access decreased by 7.9%. Thus, broadband revenues and services over connectivity accounted for 46.8% of total revenues in 2016 (+6.1 percentage points year-on-year). Mobile data revenues continued to post double digit growth this quarter (+12.3% organic year-on-year in the quarter and in the year) and represented 52% of mobile service revenues from January-December (+4.9 percentage points) due to the increased penetration of smartphones and LTE.

Operating expenses totalled 10,852 million euros in the fourth quarter and improved their organic evolution by 0.8 percentage points vs. the previous quarter to -2.3% year-on-year (-20.8% reported) due to better commercial spend evolution, a change in the trend of personnel expenses and the capture of synergies and efficiencies from the transformation and simplification process. In January-December 2016 operating expenses amounted to 38,043 million euros and decreased 0.7% organic year-on-year (-11.7% reported).

Reported operating expenses and other net income/expense for the fourth quarter were affected by restructuring cost provisions amounting to 1,290 million euros (1,250 million euros in operating expenses and 40 million euros in other net income/expense). These provisions did not impact cash flow generation in the quarter and were carried out within the Company’s transformation and simplification process, which shall enable the generation of incremental savings and efficiencies with a positive impact on cash generation.

Organic OIBDA growth accelerated to 9.4% year-on-year in the fourth quarter, with highlights including double digit growth of T. Hispanoamérica, return to growth in T. España, growth acceleration in T. UK and sustained growth rate in T. Deutschland. Thus, OIBDA accelerated its organic growth for the second consecutive quarter (+6.3 percentage points vs. the third quarter).  Excluding regulation, OIBDA would have increased 10.4% organic year-on-year in the quarter (+5.7% in January-December).

Net financial expenses totalled 2,219 million euros in January-December, 14.9% lower than the previous year mainly due to the savings from debt management (hedging in pounds linked to T. UK and lower cost of debt in European currencies) and higher revenues associated with inflation in Venezuela, partially offset by the capital loss from the sale of 1.5% stake in China Unicom (-155 million euros) and the result of the divestment in Telecom Italia, S.p.A in 2015 (+380 million euros). In the fourth quarter, net financial expenses reached 369 million euros and decreased vs. the same period of 2015 (687 million euros), mainly due to the reduction in the cost of debt and the impact of inflation in Venezuela

In 2016, CapEx from January-December totalled 8,928 million euros, including 345 million euros for spectrum acquisition, and increased by 3.9% organic vs. 2015 (-14.7% reported). In the fourth quarter, CapEx increased by 11.6% organic year-on-year (+7.5% reported) and stood at 2,912 million euros. The investment effort was mainly focused on the deployment of ultrafast networks, with investment in growth and transformation representing 78.8% of the total (+0.2 percentage points year-on-year).

Digital services revenues continued to present double-digit year-on-year growth and reached 1,281 million euros in the fourth quarter (+11.1%) and 4,792 million in 2016 (+14.1%). Video revenues, 726 million euros in the quarter (2,802 million in January-December), maintained a solid year-on-year growth rate (+9.7%; +12.4% in the year) driven mainly by the consistent increase in the TV base in Hispanoamerica (+4%) and by the improvement in ARPU in Brazil and Spain associated with the wider adoption of premium content. Pay TV accesses stood at 8.3 million as of December (including 4.3 million satellite TV accesses), stable versus 2015.

In 2016, Telefonica Global Resources has modernised the Company’s networks and systems capacities, improving service quality and customer experience and, at the same time, has accelerated the strategy of simplification and generation of efficiencies. Global Network and Operations focused on the expansion of the capacity and coverage of the ultra-broadband access network (FTTx and cable) and the network core.

The growing demand for data continued to drive strong data traffic growth throughout the year (+49% year-on-year), both in fixed broadband (+48% year-on-year). To meet this demand, at the end of 2016, the number of premises passed with ultra-broadband networks (FTTx and cable) increased to 39 million, of which 17 million were in Brazil (FTTx), 17 million in Spain (FTTH) and 5 million in Hispanoamerica (FTTx and cable). Meanwhile, 4G population coverage stood at 62%, 10 percentage points more in the year (91% Spain; 79% Germany; 95% UK; 60% Brazil; 49% Hispanoamerica), with a total of 55,417 locations.

Organic Growth: Assumes constant exchange rates from 2015, excludes the impact of hyperinflationary adjustments in Venezuela in both years and considers a constant perimeter of consolidation. In OIBDA and OI terms, excludes write-downs, capital gains/losses from the sale of companies, sale of towers, restructuring costs and material non-recurrent impacts. CapEx also excludes investment in spectrum.

Telefónica España results showed a significant improvement in 2016 and reflected the recovery of a profitable and sustainable growth profile, underpinned by a leading differential infrastructure in Europe, enabling it to increase the penetration of high value services tailored to increasing customer needs.

In 2016, service revenues returned to growth (+1.1% year-on-year) and at the same time, cost management and savings obtained from simplification have translated into year-on-year growth of OIBDA (+2.2%) and cash flow generation (+1.8%), excluding impacts.

It is important to note that the results of the fourth quarter of 2016 are impacted by the extraordinary provision of 856 million euros, booked in the quarter and associated mainly with the extension of the voluntary employment suspension plan to 2018, which will generate a positive impact on cash flow generation from 2018 and an annual run-rate of savings in direct expenses of aproximately 100 million euros from 2019. These savings are in addition to those derived from the 2016-2017 plans. 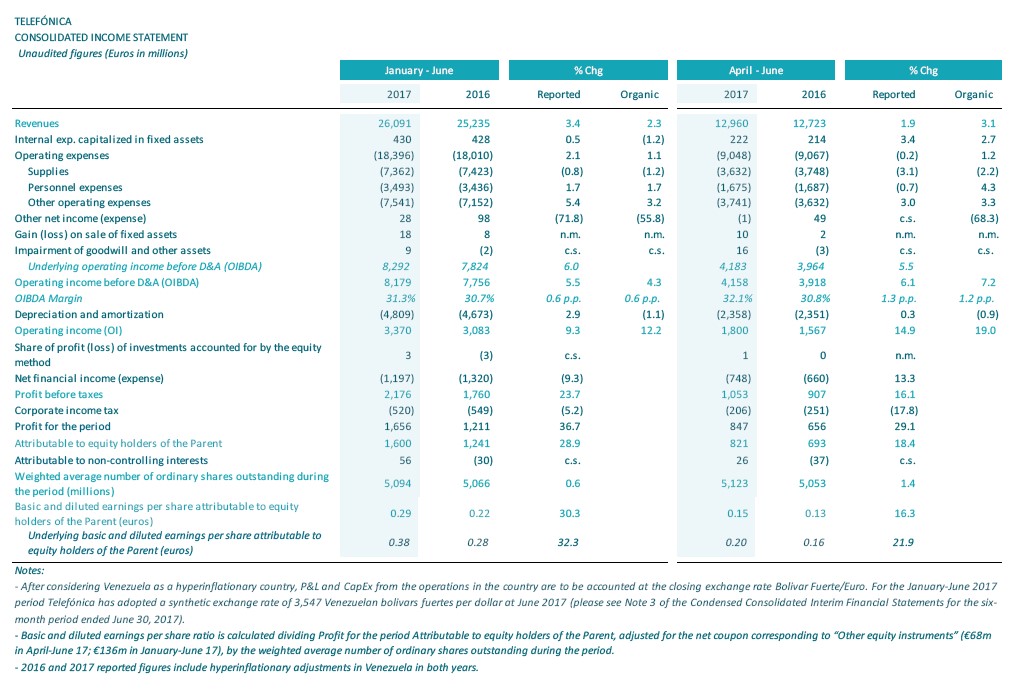 CapEx stood at 1,847 million euros in January-December, including 7 million euros for the purchase of spectrum in the second quarter of 2016 (+3.0% year-on-year; +11.6% in the quarter) due to the intense deployment of LTE and continued investment in fibre.

Telefónica Deutschland maintained operational momentum in a dynamic fourth quarter of 2016, leveraging the successful launch and encouraging customer response to its new premium portfolio “O2 Free”. Competitive pressure in non-premium segment is showing some signs of improvement, that continues in the first months of 2017.  At the same time, the Company delivered its integration milestones, generating additional savings in line with the synergy targets. In addition, Telefónica Deutschland also met its outlook for the full-year financial results. Furthermore, the results are affected by the reduction in mobile termination rates since last 1 December (-34%; from €1.66 cents to €1.1 cents).

In 2016 Telefónica UK continued to reinforce its position as a leading mobile operator, consistently outperforming the market, with a growing customer base, increasing spend by customers as well as market-leading loyalty, leading to a strong financial performance with sustained revenue growth. Total mobile accesses (25.5 million) grew 2% year-on-year driven by a 9% year-on-year increase of the contract mobile customer base.

Revenues in the fourth quarter reached 1,721 million euros and grew 2.5% year-on-year excluding the impact of “O2 Refresh”, once again improving the growth trend from the previous quarter (+0.1% year-on-year) on both mobile service revenue and handset sales and others. For the full year, revenues totalled 6,861 million euros, +0.6% year-on-year (ex-“O2 Refresh”).

CapEx amounted to 931 million euros in the January-December period, an increase of 18.7% year-on-year, mainly invested in further LTE rollout as the Company continues to expand its indoor coverage to reach 98% by the end of 2017.

In the fourth quarter of the year Telefónica Brasil consolidated the trend of solid year-on-year growth both in revenues and in OIBDA, which, together with the year-on-year reduction of CapEx in the year, translated into a strong increase in operating cash flow.

These results reflected the selective commercial activity focused on high value customers, the continued generation of synergies after the acquisition of GVT and the strict cost control, which offset inflationary pressure and regulatory impacts.

Revenues in the fourth quarter totalled 3,058 million euros (11,097 million in 2016) increasing by 1.1% year-on-year (+0.9% in 2016) driven by ARPU growth across all services, which was partially offset by regulatory impacts and lower handset sales (-2.3 percentage points and -0.7 percentage points respectively in year-on-year change for the quarter). 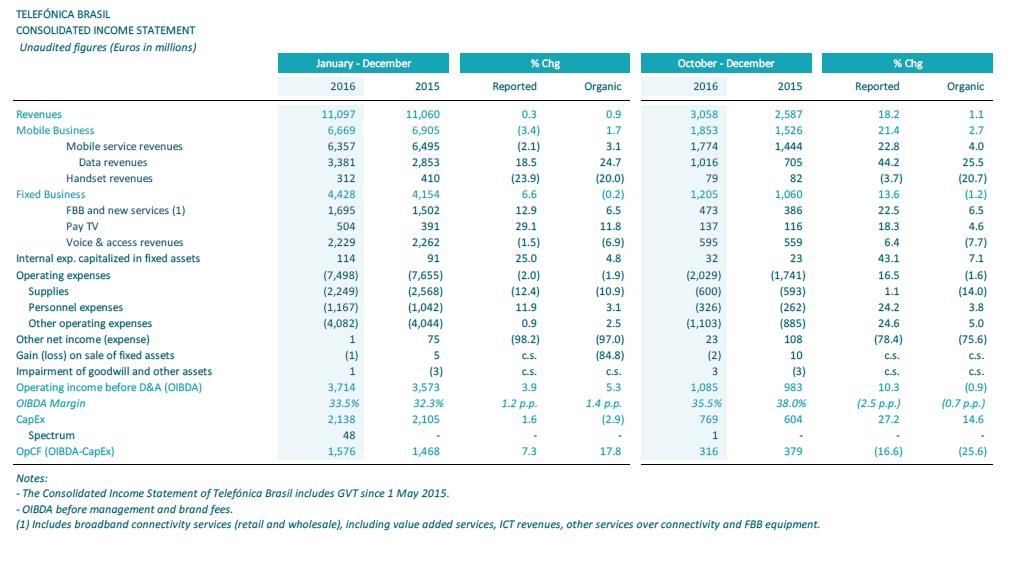 The company closed 2016 having generated synergies of 247 million euros, 95 million euros of which positively impacted revenues from cross-selling and 152 million euros in expenses from renegotiations with suppliers and from lower commercial and personnel expenses.

CapEx totalled 2,138 million in 2016 (representing 19% of revenues, excluding 48 million euros for the acquisition of spectrum in the third quarter), mainly devoted to the expansion of the 4G network and the IP backbone, to the increase in the capacity of the 3G network and to the development and improvement of fixed networks (more selective expansion of pay TV).

In the fourth quarter of 2016, Telefónica Hispanoamérica posted solid operating and financial results, with double-digit year-on-year growth both in revenues and OIBDA. These results reflected the focus on value customers, services bundling and continued network improvement. 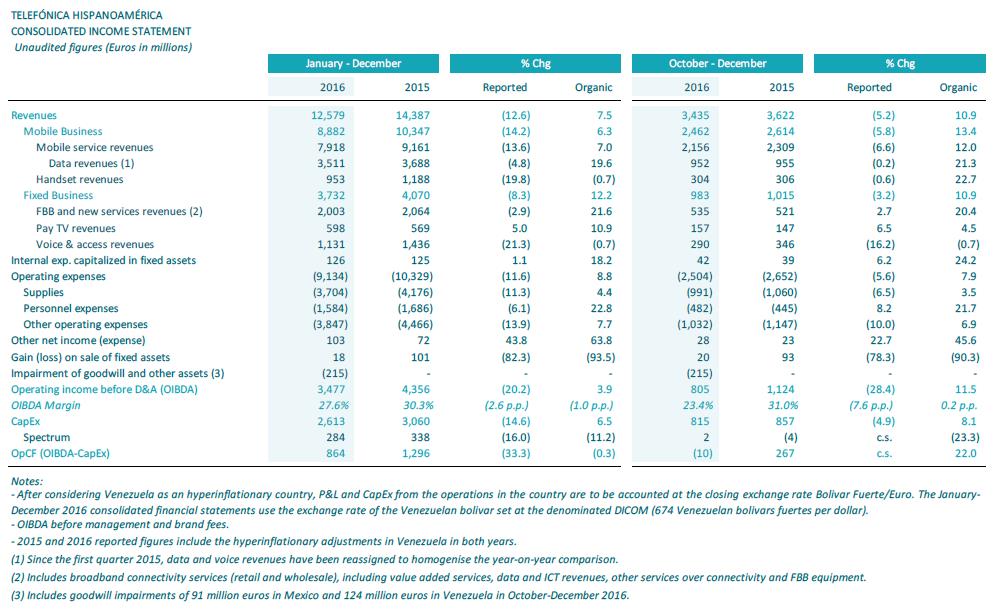 In the year, CapEx totalled 2,613 million euros and grew 6.5% year-on-year and was devoted to the deployment and improvement both of mobile and fixed networks. The year-on-year growth excluded 284 million euros of spectrum acquisition in Peru in the third quarter of 2016 and 338 million euros in 2015 due to the acquisition spectrum in Argentina, Chile, Mexico and Ecuador. Thus, operating cash flow (OIBDA-CapEx) remained practically stable year-on-year (-0.3%).