Telefónica has expanded its partnership with Allot and McAfee to duplicate the infraestructure and resources needed to protect Spanish SMEs through the Movistar Secure Enterprise Connection Service. 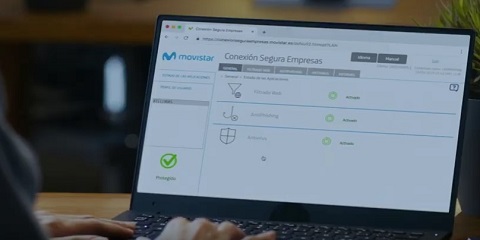 Madrid, 21 september 2020.- Telefónica has expanded its partnership with Allot and McAfee to duplicate the infraestructure and resources needed to protect Spanish SMEs through the Movistar Secure Enterprise Connection Service.

This solution, managed by ElevenPaths, the cybersecurity company of Telefónica Tech and which Works as a platform installed at the heart of Telefónica´s network, helps to prevent the employees from visiting websites reported as dangerous and inappropiate for their content, the identity theft of one site by another, and the capture of data fraudulently. It also helps to safeguard employees’ fixed and mobile devices in the event of loss and theft, even when connected to the Internet from outside the corporate network. The agreement will add the new versión of McAfee MultiAccess that includes privacy control capabilities for between 5 and 10 devices by usage licenses and the latest evolutions of the Allot platform, which features a new user portal with more capabilities.

So far in 2020, the number of SMEs in Spain that has subscribed to the service thas tripled, exceding the forecasts of the companies and has enables them to expand the platform almost 3 years earlier than initially planned. Since the end of March, despite de economic constraint imposed by the pandemic, customer demand has continued to grow at double-digit monthly rates.

As José Luis Gilpérez López, executive director of Public Administrations, Defense and Security of Telefónica España, emphasizes. “Due to current circumstances, SMEs are rapidly digitizing and cannot risk being forced to close the business, even for a few hours. Secure Connection Business gives them the peace of mind of being protected from the most common threats that come from the Internet.”

“SMB digitalization has been intensified due to the current special situation, which has forced consumers and small companies to implement new models where aspects like working from home have become critical. McAfee technology helps those companies to minimize that risk and to extend the  security level when employees connect from home or shared networks thanks to the new privacy feature which encrypts the information and make it unreachable for cybercriminals,” commented Jesús Sánchez-Aguilera, Head of Consumer and SME EMEA of McAfee.

“We are priviledged to play a parti in helping Telefónica to achieve these impressive milestones. The Allot network-based security as a service solution is very easy for customers to acquire and use, leaking to rapid and broad adoption, and its success for SMBs proves the importance for operators to provice secure broadband access to their customers”, states Francisco Cayuela Delgado, Vice President of Sales for Telefónica and Latam at Allot.

During the toughest period of confinement, in March and April, companies were more than ever dependent on their data networks, avoiding cybersecurity incidents thanks to this solution, such as downloading more than 1 million computer virus downloads, 168,000 malware downloads, and 1.2 million-page locks. Many of these attacks used as a claim, the demand for information on Covid-19.

Subsequently, threats on the Internet have continued to increase. These thousands of customers, during an average hour of service in June 2020 were protected from 34.708 fake advertising banners and 28.863 malicious websites that were part of 1.200 known phishing attacks. In addition, the download of 30 illegal antiviruses per hour (approximately 700 per day) was avoided.

The expansion of this service will be available to all companies that already have subscribed, for new customers or for those that already have Fusion Empresas service, the cloud switchboard solution that integrates voice and Internet communications and that has about 2 million fixed and mobile users in the SME segment.