Telefónica has strengthened its position for the fourth consecutive year in the Bloomberg Gender-Equality Index (GEI), which measures the commitment, practices and policies related to gender equality in participating companies. 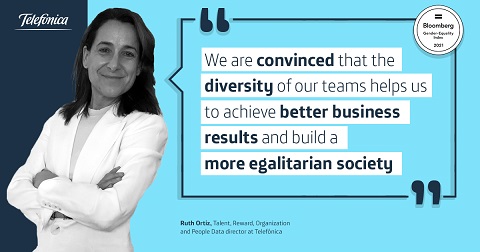 Madrid, January 27, 2021 – Telefónica has strengthened its position for the fourth consecutive year in the Bloomberg Gender-Equality Index (GEI), which measures the commitment, practices and policies related to gender equality in participating companies.

The company has improved its score, with respect to the previous year, by more than 10 points, and is one of the 10 telecommunications operators worldwide and of the 18 Spanish companies included in the index. These data are relevant as the number of companies included has increased by 55 compared to the previous year, for a total of 380, with a presence in eleven sectors, from 44 countries and regions, and a combined market capitalization of 14 trillion dollars.

Among the aspects of Telefónica’s diversity and inclusion strategy most valued by Bloomberg are the establishment of diversity criteria in the performance objectives of the workforce, the representation of both genders in the selection processes, training on biases, as well as the drive to break down gender barriers in the technological field, developing and promoting numerous initiatives such as Technovation Girls, Hacker Women, Women and Engineering or Scale Up Women, among others. Similarly, internally, Women in Leadership, a program to accelerate professional careers and increase the visibility of female employees, is being developed.

“At Telefónica we are convinced that the diversity of our teams, together with an inclusive leadership style, helps us to obtain better business results. Our commitment is to continue promoting an open and egalitarian culture that allows us to attract and retain the best talent, foster innovation and build a fairer society without leaving anyone behind”, says Ruth Ortiz, Talent, Reward, Organization and People Data director at Telefónica.

Further strengthening its commitment to transparency in the equality environment, Telefónica is one of only five Spanish companies to have responded to WDI’s Workforce Disclosure Scorecard in the 2020 edition – workforce information supported by 52 investors with $6.5 trillion under management – with a score of 77%, compared to an industry average of 61%.

It is also a signatory of the Women’s Empowerment Principles, promoted by the United Nations Global Compact and aligned through the Global Diversity Council and Telefónica’s Diversity and Inclusion Policy, which seeks to ensure both gender equality and multiculturalism and a variety of profiles, ages, skills and experiences.

Telefónica is one of the world’s leading telecommunications service providers. The company offers fixed and mobile connectivity services, as well as a wide range of digital services for individuals and businesses. It is present in Europe and Latin America, where it has more than 341 million customers.