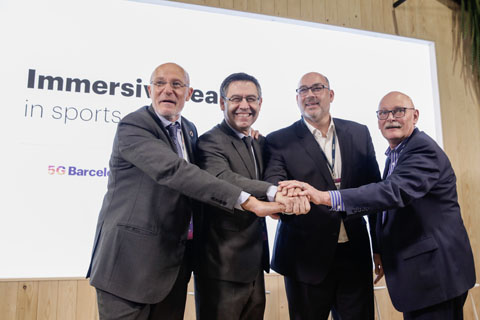 Barcelona, 26 February 2019.- The 5G Stadium-Immersive reality in sports project developed by Telefónica and FC Barcelona has turned the Nou Camp into the first football stadium with standard dedicated 5G coverage. The deployment of this technology in the stands and on the pitch using Telefónica’s commercial frequency band and a standard 3GPP network by Ericsson will allow for new, more immersive ways of enjoying sporting events at home as if you were in the stadium.

The Chairman of FC Barcelona, Josep Maria Bartomeu; the CEO of GSMA, John Hoffman; the Chairman of Telefónica España, Emilio Gayo and the CEO of Mobile World Capital Barcelona, Carlos Grau, presented the 5GStadium -Immersive Reality in sports project today, within the context of the 5G Barcelona Initiative to strengthen the position of Barcelona as the benchmark 5G hub in Europe.

Telefónica and FC Barcelona showed live images from the Nou Camp at MWC19 Barcelona, along with exclusive contents of the first team’s training session at the Ciutat Esportiva Joan Gamper stadium, and a Virtual Tour of the stadium. All this with the aim of showing how 5G technology revolutionises the way in which television contents are seen.

The placing of 360º cameras in different locations around the Nou Camp without the need for cable means that an immersive experience can be broadcast to any viewer at home. With their Virtual Reality glasses on, viewers can watch the match from “La Llotja”, next to the goal, near the benches or, in short, can choose the viewpoint required at any time, watching and listening to the game as if they were at the ground. Telefónica has developed a Virtual Reality app in partnership with the company VREstudio for live access to this sporting experience during MWC19 Barcelona.

Over recent years, the major football stadiums have become a place where new technologies play a key role in recording and broadcasting sporting experiences: cablecams, flycams, videodrones, strengthened mobile coverage and the broadcasting of exclusive contents are just some of the innovations that enhance the television experience, which 5G will expand on thanks to high uplink throughput, lower latency and edge computing, which in turn offers flexibility when positioning 360º cameras without the need for wired connections.

In recent years, large football stadiums have become a place where new technologies play a key role in capturing and broadcasting sports experiences: cablecams, flycams, videodromes, reinforced mobile coverage and exclusive content broadcast are some of the innovations that enrich the television experience and that the 5G will amplify thanks to the high bandwidth of upload (uplink), a lower latency and the Edge Computing, which in turn allows flexibility when placing 360 cameras without need to worry about wired communications.

5G technology also streamlines the uploading of video flows from 30 Mbps up to 200 Mbps for 360º qualities in 4k, whereas a streaming server on the edge of the nearest mobile network to users means that many different viewers wearing 360º glasses can become immersed in the best experience to exist today to enjoy sporting events from their mobile device.

The Chairman of FC Barcelona, Josep Maria Bartomeu, said at the presentation of the project that “For FC Barcelona it is a great pride that the Camp Nou is the first football stadium with 5G internal coverage. The Camp Nou is the largest stadium in Europe, which can accommodate more than 90,000 spectators and when the Espai Barça is a reality will have capacity for 105,000. Thanks to the agreement between FC Barcelona and GSMA, with the participation of Telefónica, we have set the Camp Nou as an innovation laboratory at the disposal of the most advanced technology in mobile telephony, the 5G “.

Emilio Gayo, Chairman of Telefónica España, indicated during the press conference that “at Telefónica we are convinced that connectivity is the oxygen of the digital world we are immersed in, and the new capacities of the 5G network will be essential in this new generation of services. Watching a world-class game of football live at the ground is a privilege that not everyone can enjoy, and this project allows us to dream of offering all our customers the chance to experience sporting events of this calibre right from the front row”.

CEO of GSMA Ltd., John Hoffman said, “The 5G Stadium-Immersive Reality in Sports pilot is further proof that the tech industry is diversifying into new sectors, becoming increasingly more relevant. With immersive reality, new generations will experience sports differently and it will offer fans an unprecedented access to sports, experiencing unique moments by customizing their own experiences from any angle, 360º.”

The CEO of Mobile World Capital Barcelona, Carlos Grau, concluded that “5G technology enables us to test an unbeatable world-class environment such as the one offered by the city of Barcelona. The technology hub into which we are converting Barcelona combines the most advanced technology with talent and innovation, and is just an example of the long road that still lies ahead of us”.

Blog
#Public Policy
Indeed, Internet has changed drastrically over the last 10 years
Blog
#Cloud Computing
What is Virtualisation and what is it used for?
Blog
#Networks and technology
How to erase our digital footprint?