Telefónica's central headquarters in Madrid were the venue for Thursday's launch of the 2020 Movistar Team. The longest-standing, most successful cycling team in the international peloton kicked off its 41st season of uninterrupted activity, a period (since 1980) in which the Blues' men's and women's teams have achieved more than 950 victories. 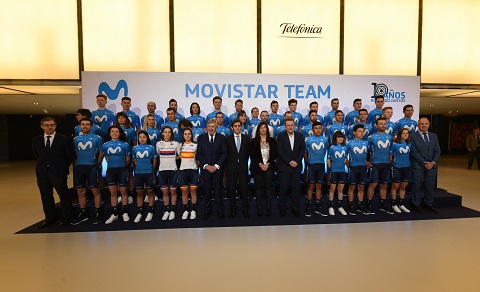 Madrid, 19th December 2019.- Telefónica‘s central headquarters in Madrid were the venue for Thursday’s launch of the 2020 Movistar Team. The longest-standing, most successful cycling team in the international peloton kicked off its 41st season of uninterrupted activity, a period (since 1980) in which the Blues’ men’s and women’s teams have achieved more than 950 victories.

Telefónica celebrated its ten years of title sponsorship of the Abarca Sports organisation with the two full rosters of the team coordinated by general manager Eusebio Unzué. Media from Spain and abroad, VIPs, famous names from the world of cycling and members of Telefónica and other team sponsors enjoyed the unveiling of the new Blue jersey, a design created by new sponsor Alé.

The Movistar Team’s 2020 roster combines its everlasting support to Spanish cycling, with 21 local riders -more than half the team-, with a reinforced international focus and a rejuvenated group. The women’s team, recently confirmed by the Union Cycliste Internationale as new member of the Women’s WorldTour -only five other cycling teams in the world will have its 2020 men’s and women’s squads at the respective top tiers-, is made of riders all 29 years old or under. National champions Oyarbide and Sheyla Gutiérrez, as well as Eider Merino and Colombia’s Paula Patiño, are the most important names of a really compact group.

The 2020 men’s team, in turn, marks a stark change from last year. Fourteen new names make for a new face to a block still led by the legendary Alejandro Valverde, with youngsters Enric Mas and Marc Soler also leading a group featuring eight riders aged 23 or younger: Elosegui, Rubio, Jorgenson, Alba, Jacobs, Hollmann, Cullaigh and the only absence in the gala, Mathias Norsgaard, due to his leg injury earlier this month.

Rafael Fernández de Alarcón, Telefónica’s Director of Brand, Partnerships and Media Telefónica, remember during the event that the Movistar Team’s sponsorship came into a very difficult moment for cycling, and took advantage of the gala to reaffirm Telefónica’s commitment with this sport both in the professional and amateur scenes, through different initiatives such as different group rides and projects carried out with the Royal Spanish Cycling Federation.

During the event, it was also announced that an inside documentary will be aired in 2020 on the team’s previous season, a set of cameramen joining the group in all competitions and capturing all moments, good and not so good, lived by the Blues during 2019. The series will follow other original products by Movistar+ during the past season, such as the documentary on Alejandro Valverde’s ‘rainbow season’ or the one summarising the 40 years of existence of the team.

Once again, the Movistar Team will make its season debut at the men’s Tour Down Under in Australia (Jan 19-26) and the women’s Vuelta CV Féminas in Spain (Feb 9), covering a calendar over 300 days of racing, across twenty countries in five continents, which combines most of the WorldTour in both categories with the best Spanish races. In 2020, the Blues will reach 3,000,000 kilometers of racing with Telefónica as title sponsor, having obtained 280 victories, three Grand Tours and two World Championships in the process. More than 30 high-end companies and a fan base near two million followers on social media and its official website (www.movistarteam.com) will again be the biggest assets of this phenomenal sports team.