As of today, Movistar is offering all its customers the Smart Wi-Fi 6 Amplifier with the latest generation of Wi-Fi, which allows coverage to be extended by up to 30% and speed to be improved by up to 5 times that of the previous model. 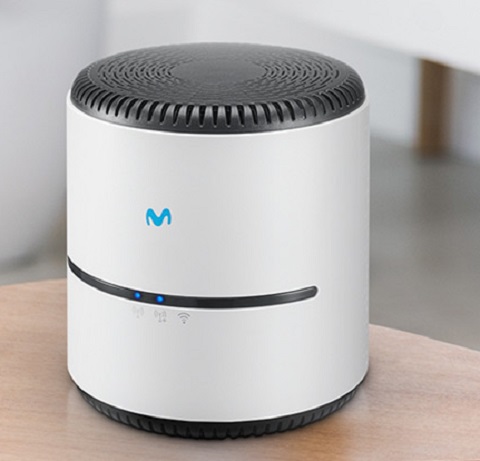 Madrid, 2nd December 2020 – As of today, Movistar is offering all its customers the Smart Wi-Fi 6 Amplifier with the latest generation of Wi-Fi, which allows coverage to be extended by up to 30% and speed to be improved by up to 5 times that of the previous model.

This makes Movistar the first Spanish operator to offer a device of these characteristics.

As Emilio Gayo, Chairman of Telefónica España, pointed out, “with this launch we are strengthening the Hogar Movistar and smart wireless connectivity by using the latest Wi-Fi technology available on the market. Movistar has been innovating year after year with the aim of offering customers the best connectivity demanded by both new services and new uses of Wi-Fi in the home with a growing number of devices connected simultaneously at different points in the home”

The Amplifier, which has limited stocks in this first phase, is available through the website or usual Movistar sales channels and is priced at €129 incl. VAT. It has a configuration of 12 internal antennas; connection speeds of up to 4 Gbps (5 times higher than Wi-Fi 5); a traffic capacity of up to 4 times higher, which allows many more devices to be connected at the same time; reinforced security with the WPA3 protocol and optimized communication with IoT (Internet of Things) devices to ensure minimum power consumption in these.

It is also worth highlighting the new smart connectivity functionalities it incorporates such as the automatic adoption of the same configuration as the previous router (to facilitate the user’s installation process) and the possibility of creating a single Wi-Fi network for the entire home with the same name and password for all the devices, regardless of the frequency band in which they operate.

The Smart Wi-Fi 6 Amplifier can function both as an access point, to set up a Wi-Fi 6 network throughout the home to replace the existing router’s Wi-Fi signal, or as a relay, extending the user’s Wi-Fi connectivity to new areas of the home.

This milestone is the latest in connectivity and builds on the success of the Smart Wi-Fi Router, the leading device in the market and the pillar of connectivity in the Movistar Home. This week marks the fifth anniversary of its launch and it is available in more than 3.5 million homes in Spain. To enhance the customer’s home connectivity experience, the user can manage and optimise the network of this and other connected devices such as the Amplifier, by Smart Wi-Fi Mobile App and if the customer has a UHD decoder, through the Living App Smart Wi-Fi on Movistar+.