This collaboration will provide the hotel chain with greater flexibility in its applications thanks to cloud services, fibre optics, and Big Data. Madrid, October 24, 2016.- The... 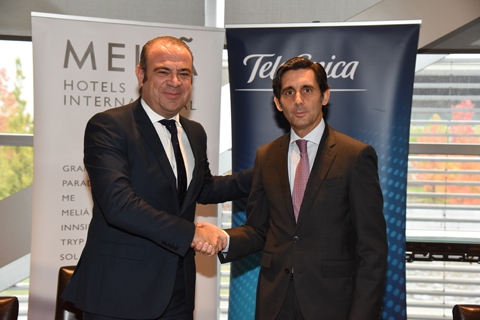 Madrid, October 24, 2016.- The Chairman and CEO of Telefónica, José María Álvarez-Pallete, and the Vice-President and Chief Executive Officer of Meliá Hotels International, Gabriel Escarrer, signed a collaboration agreement today that encompasses the awarding of all Meliá Group infrastructure operations services around the world to Telefónica.

In this way Telefónica becomes a key partner in the current digital transformation process that Meliá Hotels International is embarked on, the goals of which range from achieving greater flexibility in the management of applications to increasing the coverage of their service at a global level.

The agreement will boost the technological renewal of the information systems (data centers, servers, tools, etc.), as well as the evolution of the hotel group’s communications services. The deployment of the high availability fibre optic network presents itself as a fundamental part of the cloud infrastructure solution, allowing for centralized management.

The agreement includes the provision of a complete suite of “plug & play” services that, delivered from the cloud through Telefónica’s ultra-broad band, will make a more agile and efficient execution of the growth plan and opening of new hotels agreed upon in MHI’s strategic plan, possible.

Technological leadership was one of the key factors when choosing Telefónica as partner in order to continue evolving the work station (End User Programming), among other things. With comprehensive end-to-end management sustained on virtualization platforms, as well as the most advanced Help Desk tools, the telecommunications company will provide support to all Meliá employees (more than 42,000 professionals around the world), including 365/24/7 incident coverage, guaranteeing both customer service excellence as well as the reduction of the resolution times of said incidents. The model that Telefónica will implement also allows the standardization and simplification of global level services, together with a cultural and schedule approach to the different regions in the world where the Meliá Group is present.

Telefónica’s global services proposal will result as enabler in the digital transformation of Meliá Hotels, thus contributing in its goal of increasing customer satisfaction and closeness, offering them maximum quality experiences in their hotels.

During the signing of the agreement Gabriel Escarrer, Chief Executive Officer of Meliá, emphasized that “in a highly competitive digital world like today’s, where innovation is continuous, technology has become a central part of our strategy, and the choice of the best technological partners constitutes a critical factor for the success of said strategy. Because of this, we feel totally satisfied with the collaboration that we are premièring today with Telefónica, a communications and digitalization leader and reference, in order to walk hand-in-hand forwards into the future”.

For his part, the President of Telefónica, José María Álvarez-Pallete expressed that “the alliance of two leading Spanish companies is always great news, more so in the case of Meliá and Telefónica, two of the most international Groups in the country. Companies need to quickly transform and adapt to the new challenges and opportunities that the current digital environment presents. The agreement signed today will make us stronger and more competitive, will boost the competitiveness of both companies, and will also promote our international reputations in two key industries such as technology and tourism”.

The company has a significant presence in 21 countries and 347 million accesses around the world. Telefónica has a strong presence in Spain, Europe and Latin America, where the company focuses an important part of its growth strategy.

Founded in 1956 in Palma de Mallorca (Spain), Meliá Hotels International is one of the largest hotel companies in the world and the absolute leader in Spain with more than 370 open hotels or in the process of opening in more than 40 countries under the Gran Meliá, Meliá Hotels & Resorts, Paradisus Resorts, ME by Meliá, Innside by Meliá, Tryp by Wyndham, and Sol Hoteles brands.

The strategic focus in its international expansion has led it to become the first Spanish hotel company present in China, the Unites States, or the United Arab Emirates, as well as to maintain its leadership in traditional markets such as Europe, Latin America, or the Caribbean. Together with this, some of the factors that stand out the most are its diversified business model (one of the main hotel management companies in the world), its growth supported on major strategic alliances, and its wager on responsible tourism. Due to its strengths, Meliá Hotels International has the best corporate reputation (Merco Ranking) in the Spanish tourism company, and is one of the most attractive companies where to work at an international level.