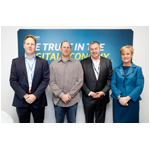 Barcelona, Mobile World Congress, Tuesday, March 3, 2015. Telefónica (NYSE:TEF), one of the largest telecommunications companies in the world with operational presence in Europe and Latin America, and Microsoft (NYSE:MSFT), worldwide leader in software, services and devices, announce a joint initiative for the provision of TV OTT  (TV Over the Top) on devices with Windows Phone OS.

Telefónica’s Movistar TV Go service for Windows Phone 8.1 will enable Telefónica users to enjoy their favourite TV content, both linear and on-demand – just by speaking into the phone. The unique Cortana technology is integrated for the first time in Telefónica’s worldwide commercial video service as a differentiating and innovative experience for Windows Phone users who will be able to search for content through the natural speech interface.

The announcement has been released during Mobile World Congress (MWC) 2015, where we encourage visitors to see a demonstration of this new service with Cortana at the Telefónica booth.

Telefónica aims to launch the final commercial version of the Movistar TV Go app on Windows Phone 8.1 shortly after the MWC. Meanwhile, it will be tested in a Spanish language “beta” version to ensure perfect consumer interaction through Cortana natural speech. It will be the first time that Cortana for Spanish language is integrated in a  worldwide commercial service, positioning Telefónica as a key partner for Microsoft to develop this kind of innovative experience in a worldwide footprint.

Michael Duncan, CEO of Global Video Unit of Telefónica, welcomes this joint initiative between the two companies. “The availability of our television services on mobile devices increases the attractiveness and potential for enjoyment of the content we offer to our users, and places Telefónica at the forefront of video products with an offer of TV Everywhere which is increasingly diverse,” said Duncan.

Steven Guggenheimer, Corporate VP & Chief Evangelist, Microsoft Developer Experience and Evangelism at Microsoft, highlights the great team work. “We are very pleased to have achieved this milestone with Telefónica. Rather than just performing voice-activated commands, Cortana continually learns about each user and becomes increasingly personalized, with the ultimate goal of proactively performing the right tasks at the right time. Telefónica’s support is helping us to speed up this process.”

Movistar TV Go service for Windows Phone will be available first in Spain and then in other Latin American countries where Telefónica is offering pay-TV services. The availability of Movistar TV Go on Windows Phones increases the range and sophistication of mobile devices and home screen (set-top boxes) that support pay television within Telefonica. TV content is currently distributed via satellite, cable, IPTV and OTT over the Internet.

Telefónica is a 100% listed company, with more than 1.5 million direct shareholders. Its share capital currently comprises 4,657,204,330 ordinary shares traded on the Spanish Stock Market and on those in London, New York, Lima, and Buenos Aires.

Founded in 1975, Microsoft (Nasdaq “MSFT”) is the worldwide leader in software, services, devices and solutions that help people and businesses realize their full potential.