César Alierta: “The digital revolution will not take place without the involvement of the telco sector”

- He stressed the need to improve the levels of transparency and the tools necessary for users to have full control of their privacy and better protect security in their relationship with the Internet. 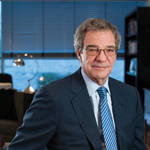 – He stressed the need to improve the levels of transparency and the tools necessary for users to have full control of their privacy and better protect security in their relationship with the Internet.

Mobile World Congress, Barcelona, 2 March 2015. Telefónica Chairman César Alierta, has today pointed out in Barcelona, that what is going to make the difference in the level of development and welfare of societies is the degree of their digitization, which will have a positive impact on innovation, productivity and employment, but that this digital revolution will not happen without the involvement of the telecommunications sector. “Ultra-broadband networks, fostered by huge investments, are being deployed across geographies by operators, networks that let everyone and everything be connected, generating immense opportunities for all”.

César Alierta has also emphasised the challenges faced by the industry itself and its need for a balanced scenario with other players in the Digital Ecosystem. “We defend that policies and regulations should be revised, considering the whole Internet value chain, and ensuring non-discrimination and a level playing field amongst parties”, said César Alierta. He added that “there is a need for improving transparency and tools that will allow users to have full control of their privacy, as well as better protect their security when they are using the Internet. This is what we call Digital Confidence”. In summary, he explained that Net Neutrality should basically ensure that users enjoy an Open Internet experience, and for this reason, the focus should be on Digital Neutrality.

During his speech at the opening session of the Mobile World Congress, the Chairman of Telefónica has stressed the concept of the Industrial Internet. He reminded attendees how digital technology has modified economic cycles, has blurred geographical boundaries and also altered society and the business world. He also stressed the Industrial Internet – the convergence of the global industrial system with the power of advanced computing and new levels of connectivity- is expected to be an even more powerful and disruptive wave of the Digital Revolution.

“According to recent reports, in the next twenty years the Industrial Internet will have added to the global economy about the size of the USA economy today, and boosted GDP per capita by nearly one fifth”, explained Alierta, while stressing that globalisation demands further productivity gains in all markets, including Spain. With regards to Spain, César Alierta has recognised that today, “it is one of the world’s most globalized economies, being more productive and more competitive”.

César Alierta has illustrated his statement with the current figures that show the speed of the changes in the industry and with forecasts for the future. He stated that 43% of the world population is connected to the Internet, that there are more than 780 million households connected with fixed broadband and that there are 2.8 billion mobile broadband accesses. However, he recognised that growth we have seen so far seems insignificant compared to what we expect in the future.

According to the president, in 2020, 90% of the world’s population over the age of 6 will have a mobile phone; approximately 90% of mobile subscriptions will be mobile broadband; LTE coverage is estimated to exceed 70%; mobile data traffic will multiply by 10; and there will be 50 billion “connected things”. “However, technology is nothing without people”, assured the President of Telefónica. “What matters is how we can improve people’s lives. Technology has transformed the way in people are in touch, keep up to date, enjoy, buy, share and learn. That is why we believe that technology should be open to everyone, so that everyone can enjoy this fascinating world”.

Press room
#Innovation
The Fundación Valenciaport allies with Telefónica for the development of the incubation and acceleration programme of the Port of Valencia Innovation Hub
Blog
#Public Policy
Connecting the unconnected: A Rural Manifesto for Latin America
Press room
#Metaverse
Telefónica seeks startups worldwide with metaverse use cases