The Vice President of the European Commission, in Cadiz to maintain a dialogue with citizens

Follow it by webstreaming and take part via Twitter con #QuéEuropaQueremos   Vice President of the European Commission, Viviane Reding , has selected Cadiz to launch a series of... 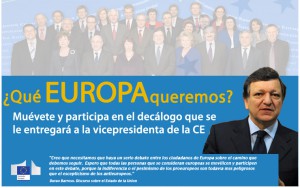 Vice President of the European Commission, Viviane Reding, has selected Cadiz to launch a series of Dialogues with Citizens that will take her throughout the European Union asking them the question: What kind of Europe do we want? This first Citizens Dialogue will take place this Thursday from 12:30 p.m. to 2:00 p.m.

The Vice President’s aim is for this dialogue to reach as many people as possible and, to achieve this, the Internet and social networks are the best ally. The event will be retransmitted via the Internet from 12:30 p.m. Anyone interested can see it here with simultaneous translation from Spanish to English and vice versa (to access the translation simply select the language tab that is in the player). Anyone who wishes to give their opinion or ask the Vice President of the European Commission a question will be able to do so via Twitter using #QuéEuropaQueremos as hashtag.

Topics: What kind of Europe do we want?

The Citizens Dialogue will be structured around three main topics, then move on to a debate.

The economic crisis in Europe. Has the European Union done enough to solve the crisis? Does it believe that Europe is part of the problem or part of the solution?

Citizens rights. European citizenship entails certain rights and obligations.  What does Europe mean in our daily lives?  What can Europe do to improve the lives of its citizens?

The future of Europe. The economic crisis has led to profound changes in the economic, political and social situation in the EU and in its Member States. How should the European Union adapt to this new reality?

From the 9th to the 23rd of September a forum on the European Commission’s Facebook page in Spain was created: http://www.facebook.com/comisioneuropea People were asked to leave contributions that responded to the question: What kind of Europe do we want? The most voted contributions have become part of a decalogue that will be delivered to Vice President this Thursday.

A total of over 120 contributions were received, the majority from citizens, but also from entities such as the European Information Centers or Telefónica’s public policy area.

We encourage you to follow the Citizens Dialogue via webstreaming and participate via Twitter with #QuéEuropaQueremos this Thursday, 27th September, from 12:30 p.m. to 2:00 p.m.