Javier Domínguez Lacasa, from Telefónica España, presents today the content of the last number of the Review “Regulatory and Economic Policy in Telecommunications”. 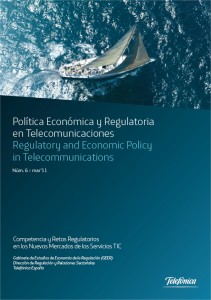 Javier Domínguez Lacasa, from Telefónica España, presents today the content of the last number of the Review “Regulatory and Economic Policy in Telecommunications”.

The new issue of “Regulatory and Economic Policy in Telecommunications”, was presented at the end of March at Telefónica headquarters in Distrito C. In line with the theme of the issue, “Competition and regulatory challenges associated with new ICT services”, the presenters described a new environment where end users have much to gain, but where telecommunication operators do not (yet) feel at ease.

Ironically, as the value of a broadband access grows those who take the risk of investing in broadband access networks seem to be entering a sort of mid-life crisis, feeling unsure about their future role and challenging the attitudes and values that have made them what they are today. The question that floated in the air, and deserves further discussion, is why most policy makers pretend to be exempt from this arduous process of self search.

Concepts like mobile applications, online advertising or connected TV fill the articles of this 6th issue of the Review, and we’re led to believe that Over The Top Services have the potential to reverse the downward trend in retail revenues that “traditional” services like telephony or internet access are experiencing (according to the Spanish Regulator, the CMT, total revenues for the sector in Spain in Q3 2010 were 8% lower than in Q3 2008, and revenues for internet access declined year on year for the first time in Q3 2010).

However, the fact that somewhere in the value chain someone is able to turn value into money does not necessarily make telecom operators happier, nor does it increase their appetite for investment. For a start, it is not clear that incremental revenues coming from Over The Top Services justify the resources needed to upgrade the last mile. Secondly, it is uncertain how network suppliers will take a share of those revenues.

Regulation does not help, and commercial decisions that are seen as normal practice when taken by Apple or Google, like financing their Application Platforms through a revenue-sharing agreement with application developers, raise suspicions when the platform is owned by Telefónica, France Telecom or Vodafone. After reading the new number of the Review, it is apparent that traditional operators do not have much market power as suppliers of platforms for the distribution of content and applications. If operators tried to charge an excessive price, application developers or end users would just turn to an alternative platform. Application developers already adapt their designs for several platforms, and Apple has shown that the network provider does not “own” the customer. Traslating those market facts into the regulatory language is a challenge, but one worth pursuing. 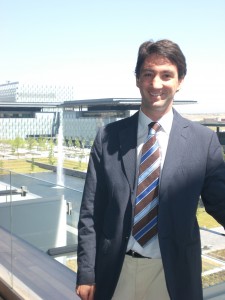 Javier Domínguez currently works in GEER, the Unit of Economic and Regulatory Studies at Telefónica España, and is a member of the editorial commitee and regular contributor to “Regulatory and Economic Policy in Telecommunications”, a biannual journal edited by Telefónica España.