Public organisations, and private companies and citizens are aware and ready to slow climate change. However, government intervention is definitive when making large... 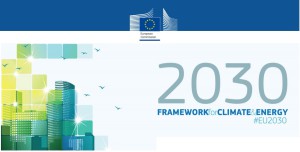 Public organisations, and private companies and citizens are aware and ready to slow climate change. However, government intervention is definitive when making large scale changes, which are necessary when facing the current situation and predictions for the coming years if measures are not taken.

With this aim, the European Council, in a meeting on 23 and 24 October this year, determined a new framework for the European Union energy policy. Essentially, the Council’s resolution sets new goals for the EU in relation to the reduction of greenhouse gas emissions, improvements in energy efficiency and greater use of renewable energies, goals that should be fulfilled before 2030. (Watch the video of the news on EuroNews).

European stakeholders should focus on these goals before the 21st Conference of the Parties at the UNFCCC (United Nations Framework Convention on Climate Change) and the eleventh period of sessions on the meeting of the Parties in the Kyoto Protocol that will take place in Paris next year.

Next we describe the main goals that need to be met before 2030:

In this regard, Spain, the Baltic States and Portugal should be supported by the European Energy Security Strategy, which requires that Member States and the European Commission facilitate its implementation.

The overall and common goal of all EU members, which is the basis on which the European Council sets its goals, is the construction of an “Energy Union”, where energy would be more economic, safe and sustainable.

These new measures have a direct effect on business activity both in economic sectors directly related to energy and in those that indirectly do well through the volume of energy consumption and greenhouse gas emissions, or through the solutions that they offer in reaching the Council’s goals.

For example, a company that needs to reduce their CO2 emissions should include hybrid vehicles in their fleet or a new smart system of managing fleets, which would involve a large investment. It is here that the debate emerges about whether companies which are strongly affected should receive public, financial and practical support to achieve these goals.

The Communications and Information Technologies sector, which Telefónica is part of, is currently unaffected by a specific goal or regulation to reduce emissions. However, in the case that the aims set out by the EU are not reached, taxes on energy consumption and emissions will increase in general, and this will seriously affect the profit and loss accounts of companies with high emissions and electricity consumption.

With the development and growth of company activity, there will also be an increase in consumption and so it will be necessary to reduce energy costs and emissions. To tackle this challenge, Telefónica has proposed the following goals for 2015:

These are only some of the measures that the company has put into place through its policy for environmental management and sustainability. The clear commitment of Telefónica towards environmental goals has been evident for many years, with the company, for example, succeeding in reducing its energy bill by €64 million between 2007 and 2013.

The relationship between stakeholders is an issue that the European Commission has listed as key in implementing a new policy, this is where the services by companies in the TIC sector take on particular importance. According to the ITU, “TICs have the potential to reduce emissions and energy consumption in other sectors through smart building services, smart metering, smart transport systems, etc.”.

In this sense, the following Telefónica services should be highlighted:

You can find information about Telefónica’s results, its environmental management, volume of CO2 emissions, energy consumption, etc. in the 2013 Report on Sustainability.