The Report “ InnovaLatino : Fostering Innovation in Latin America”, is the result of a two year-long investigation project. It was produced by INSEAD and the OECD Development Centre with... 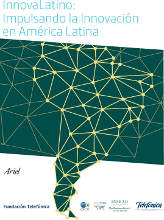 The Report “InnovaLatino: Fostering Innovation in Latin America”, is the result of a two year-long investigation project. It was produced by INSEAD and the OECD Development Centre with the support of Fundación Telefónica, and is based on a survey of 1,500 manufacturers in Argentina, Brazil, Chile, Colombia, Costa Rica, Mexico, Peru and Uruguay.

The recommendations of the InnovaLatino Report include:

The report was presented last 4th of May in Casa de América in Madrid. The event began with a welcome speech by Javier Nadal, Executive Vice-President of Fundación Telefónica.

Ferran Adriá followed with a Keynote speech about the concept of innovation and the process of creativity. His experience about continuous transformation in his restaurant and the creation of El Bulli Foundation was very illustrative.

The next step of the event was a round table with Latin-American innovators: Rafael Rangel, Director of the Sistema Tecnológico de Monterrey, Mexico; Raúl Rivera, Chairman of the Fundación ForoInnovación, Chile; Javier Santiso, Director of Telefónica; Rodrigo Baggio, Chairman of the Comitê para Democratização da Informática, Brazil. All of them sized the innovation in Latin America from different perspectives, from multinationals view to social innovation in the region.

The formal presentation of the report was made by Mario Pezzini Director of OCDE Development Center, Soumitra Dutta, Director of eLab, INSEAD and José María Álvarez-Pallete, Executive Chairman of  Telefónica Latin America.

“Latin America has made great strides in innovation, including in macro-economic-management, policies to foster middle-class growth and the development of new business models” said Mario Pezzini, Director of the OECD Development Centre. “However, governments still need to invest more and better on innovation to increase productivity and compete in global markets.“

As well as the private sector, the public sector has made great strides in promoting innovation in Latin America. For example, Argentina has created a new Ministry of Science Technology and Productive Innovation, which promises to make its innovation policies more coherent, and Chile is using the increased revenues from commodity-exports to support innovation. Other cases of experimentation can be found throughout the region.

“Innovation is not just R&D in laboratory”, notes INSEAD eLab’s Soumitra Dutta, “this study will inform Latin American policy makers who can establish the conditions necessary to encourage more firms to push forward the innovation frontier.”

Latin America is becoming the source of new forms of innovation that will be imported by the more advanced economies. In fact, according to José María Álvarez-Pallete, chairman of Telefónica Latinoamérica, “In the present decade we will see emerging regions introducing to the world more and more of their innovations, which are the result of the application of their creativity to the social and technological challenges they face.”

The session was closed by Juan Tomás Hernani Burzaco, General Secretary of Innovation, Government of Spain.

To download the full report and access strategic recommendations for national governments in the region, please visit www.innovalatino.org.