Bernardo Quinn: “Internet para Todos reminds us what we are here for”

Executive Excellence interviews Bernardo Quinn, CEO of Telefónica Hispam Sur, to look in detail at how to reduce the digital divide through the 'Internet para Todos" project.

Executive Excellence interviews Bernardo Quinn, CEO of Telefónica Hispam Sur, with more than 27 years of experience at the company, to look in detail at how to reduce the digital divide through the ‘Internet para Todos project.

According to the UN, approximately 50% of the world’s population will be connected to the Internet by the end of 2019. The other unconnected half, some 3.8 billion people, will not be able to take advantage of the socio-economic benefits of digitisation. To help reverse this situation and democratise Internet access, a couple of years ago Telefónica started one of the largest open collaboration projects in Peru: Internet para Todos (Internet Para Todos).

BERNARDO QUINN: Internet Para Todos (IpT) is the kind of initiative that gives meaning and generates value for many parties. In our case, as a telecommunications company, it reminds us what we are here for. Each organization has its own vision, but when Telefónica is asked about ours, we are clear that what we want is to connect people, because it is people who give meaning to technology, not the other way around. We want to make a better world by connecting people’s lives, and that materialises with these kinds of projects.

“IpT was born from the realisation that although we are serving population centres and cities in major countries, there are rural locations where we have not been able to reach. IpT emerges with the vision and passion of wanting to connect those people who today do not have access and to prevent the digital divide from widening further, because if we only provide Internet connection to a particular group, we are causing others to become increasingly isolated in the world“.

Often, identifying a business opportunity is less of a priority than, for example, continuing to deploy fibre optic networks or increasing 4G capacity in capital cities. This is usually the type of project that gets passed over when there is a limited CAPEX or investments. That’s why we had to look for totally disruptive ways to be able to reach rural populations, which include new technological alternatives and, more interestingly, the recognition that it does not make sense to do it alone, you have to seek agreements with third parties.

F.F.S.: In fact, IpT is an original initiative of Telefónica, which has been joined in Peru by different partners, such as Facebook, BID Invest and CAF. What is the inside story of this open collaboration? And why did you decide to start in this country a couple of years ago? 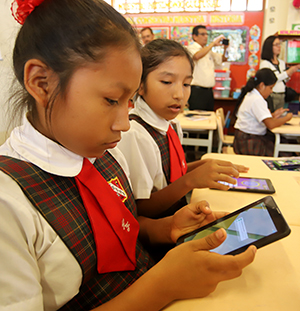 B.Q.: We estimate that today in Latin America, including Brazil, there must be around 100 million people without access to the Internet, although this information is difficult to cross-reference and verify.

In the case of Peru, there are six million people without access to the Internet. Of those, possibly fewer than half may currently only have 2G coverage, i.e. voice coverage only; and there are another three million without access.

Telefónica’s Innovation team was already in discussions with Facebook, whose mission shares the objective of the Internet reaching as many places as possible, as Facebook is interested in their technological platforms being used by more people. With this, we identified this challenge of the cost-benefit equation, to make it an attractive business in these areas as well.

We then decided to invite two other partners, in this case financial partners, who also participate in equity, namely BID Invest (member of the Inter-American Development Bank Group) and CAF (Development Bank of Latin America). These are two investment banks whose mission and vision is to find this type of project in Latin America. Together with Facebook, BID Invest and CAF, we created a company, an independent and separate legal entity in which we, as Telefónica del Perú, provide our 2G assets in rural areas of the country, and thanks to the contribution of these three partners we are going to cover 30,000 population centres in Peru between now and 2021, a significant date as it coincides with the bicentenary of the country’s independence.

In other words, Telefónica del Perú is opening up its rural business to IpT Peru, and Facebook, BID Invest and CAF are investing in the new company with the aim of improving existing voice services and deploying new infrastructure to offer mobile Internet coverage with a wholesale model.

Wholesale, because we offer the possibility that any telecommunications company does not have to redeploy its infrastructure on those sites – which would not be profitable – but can be directly uploaded as a virtual mobile operator and leveraged into a single physical structure.

F.F.S.: Why have you chosen Telefónica to follow this model for making the most of synergies, and what are the benefits?

B.Q.: This is a tremendous learning curve for us, because we want to transfer what we are discovering in this large-scale project being carried out in Peru to other parts of the business in the region.

For example, we have been able to find new ways to deploy fibre optic infrastructure for the inter-urban backbone at half the usual cost. There is a lesson in there about the phenomenon of network software and network virtualisation. Historically, also in our sector we had traditional vendors that offered “more proprietary” solutions, which included both hardware and software elements. What we have done in several locations is to separate the two elements – the so-called virtualisation process –, as this has several advantages.

Firstly, a significant cost reduction, as we can now look for new small suppliers of independent elements; instead of buying a closed integrated solution. And secondly, and more significantly, having separated them, the software also ceases to be proprietary and allows us to take it to the cloud. This is fundamental, because one of our biggest challenges was how to reduce the cost of maintaining and operating networks. Obviously we could not always send a technician to work on site in those distant places. The solution was to be able to interact remotely with the different network elements, both the transport and the radio base itself, which is what ends up connecting the final customers. Opening up the network to incorporate new providers in this way is what we are doing now, unbundling the hardware from the software, and taking the latter to the cloud; which also favours a more remote and economical management of this type of networks.

But let me tell you another interesting case, linked to technology, that demonstrates the benefits of this shared model.

For Telefónica, one of the keys to the deployment of these infrastructures is the use of information from different media. Our internal information revealed to us that several of these communities already had 2G service, and thanks to that we discovered the number of individuals who used them, the traffic, where they called, etc. Through Facebook, we have been able to complement this partial and isolated information, because they had identified the people from these communities who connected to their platform from other cities. In other words, people who lived in these places without access to connectivity, when they moved to cities with 4G, took their smartphones with them – which was a pleasant surprise to discover that they already had one – and could communicate. That information enriched us enormously.

Another source was the satellite photos of the population centres, which allowed us to optimise the location of the antennas. Previously, we did not have that information and we went to the town square, or close to it, and we placed the antenna there; but often, the layout of the surrounding houses was not uniform, or even 500 meters in a straight line there was another small village. Now Artificial Intelligence allows us to identify the houses and their relative sizes and formulate the algorithm to determine where the traffic actually is, so that the antenna is placed where there is most real coverage geographically.

All this learning is spectacular, and of course we are taking it elsewhere.

F.F.S.: Behind Internet Para Todos there is a vision of future and shared value, but it involves a sustainable and profitable business. How do you achieve this goal? 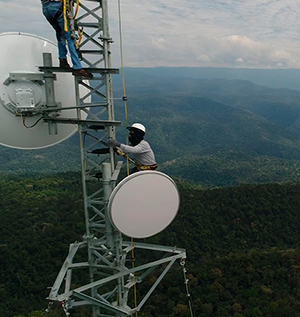 B.Q.: IpT must be self-financing. We have to be profitable precisely by generating economies of scale, by finding other cheaper ways of making the infrastructure deployments I mentioned earlier and, above all, by opening it up to third parties. This is very important, because they will be able to deploy and market their services, which will generate traffic on this telecommunications operator that owns the infrastructure.

That is why it is not only an agreement with other private partners; there also there has to be an agreement with the relevant authority, which has to guarantee certain ground rules and a set of regulations that allows this type of operator to be established; and this is something that Peru has. Under Peruvian law there is a thing called the Rural Mobile Infrastructure Operator (OIMR), which is duly regulated, because without the sharing of infrastructures they would never generate the numbers for a profitable deployment in these places.

If, in addition, through this, it is possible to digitise the red tape, a virtuous cycle is produced that will help these towns and villages to get digitised and make the relationship with the State and relevant authorities more and more efficient.

F.F.S.: You know the telecommunications sector from different angles and have a unique global vision. I would like to know your opinion on its future, in the light of the forecasts that are being made.

B.Q.: It is a complex and exciting subject, which I would like to address from two perspectives.

We must remember the history of telecommunications. The first challenge was that of fixed telephony to connect sites; we had to connect 1.5 billion physical sites. The next step was to connect people, and today there are more than 7 billion smartphones that allow them to be connected. Clearly, the next opportunity – and where we play a fundamental role – is the Internet of Things (IoT) and the Internet connectivity of an estimated 50 billion things, even though everything we can think of today falls far short of what is possible, because the limit is going to be what we want it to be.

What is certain is that 5G is going to be a fundamental piece of the puzzle for that to start happening. I believe that the combination between optical fibre plus a transmission speed through the fibre itself and technologies that will be 5, 6 or 10G, or whatever, is the great opportunity. Connecting everything is the raison d’être of companies like ours.

On the subject of ethics, I am very proud that we have made that conscious decision. At Telefónica we believe that the information you generate as a customer is yours alone, and we guarantee that we will not give it to third parties. The ethical challenge that we face is a social challenge; it is something that is neither written nor regulated, but we are committed to carrying out our work transparently, ethically and honestly.

This is just an extract from the interview originally published in Executive Excellence in Spanish. You can access the full text in the following link: http://www.eexcellence.es/index.php/entrevistas/alta-direccion/internet-para-todos-telefonica-brecha-digital-peru