Álvarez-Pallete: “Europe has to review its traditional regulation to face the 5G revolution”

Telefónica Chairman José María Álvarez-Pallete said on Monday that "Europe needs to review its traditional regulation to deal with the 5G revolution. We must have an open mind as operators, everything that can be shared, that is not differential for customers, should be, and we need the support of the regulators," he said, "because 5G is not an evolution, but a revolution". 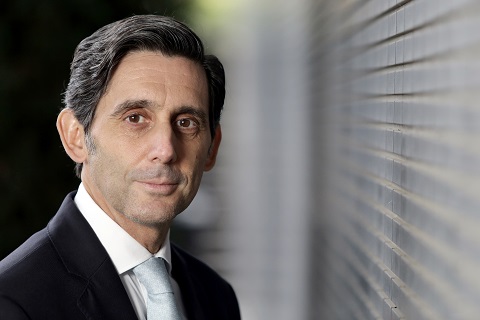 Madrid, February 1st 2021.- Telefónica Chairman José María Álvarez-Pallete said on Monday that “Europe needs to review its traditional regulation to deal with the 5G revolution. We must have an open mind as operators, everything that can be shared, that is not differential for customers, should be, and we need the support of the regulators,” he said, “because 5G is not an evolution, but a revolution”.

Telefónica’s chief executive made this call during a debate organised by the Centre for Regulation in Europe (CERRE), entitled ‘Connected through Europe’s recovery: debating with industry leaders’, in which Vodafone CEO Nick Read and Qualcomm President and CEO Cristiano Amon also took part.

Álvarez-Pallete emphasised that “digitalisation means growth, quality employment, sustainability and inclusion”, and he substantiated this not only by referring to the fact that digitalisation could bring up to 3.2 percentage points of annual growth to European Gross Domestic Product (GDP) until 2025, but also by highlighting the role that digitalisation, with connectivity as one of its main levers, has played during the pandemic. “Connectivity is the backbone of society. Our networks have not only carried gigabytes during these months, but people’s lives. Excellent connectivity is now more relevant than ever because when the physical world shut down, the virtual world remained open. The telecommunications sector has been part of the solution,” he said.

“We all want and need digitalisation”, the chairman of Telefónica stressed, which is why, along with the technology and connectivity needed to achieve it, it is necessary to “fully digitise internal processes and interfaces, a profound cultural transformation and for citizens and customers to be equipped with the necessary digital devices and skills”.

New rules for the digital world

In this respect, he insisted on the need to implement a new regulatory and industrial model. “Telecoms regulation remains the great frustration of European network operators,” he said. He added: “If regulation continues to focus on price pressure, the industry will not be able to address investments for fibre and 5G deployments or new data services and European citizens will be left behind in the digital transition”. “We are the only sector that has been consistently deflationary in recent years. We offer more quality and more services, but prices have continued to fall because of the artificial competition introduced in the telecommunications sector. This is a structural error and a new industrial approach is needed,” he demanded.

For this reason, he believes that “the EU must better align competition policy and industrial policy if the EU’s industrial strategy is to succeed”, because otherwise it will become increasingly difficult for the sector to make the necessary investments and find the right return to carry them out. “Europe can count on telecoms operators to accelerate recovery and increase its competitiveness on a global scale. We are the only ones who can invest and create an environment of innovation for Europe to preserve its digital sovereignty. But Europe must allow the sector to grow stronger to remain globally competitive,” he continued.

In another of his speeches during the debate, Álvarez-Pallete called for a level playing field between all actors in the market and new rules for the digital world. ” Europe faces unbalanced rules of the game and outdated policies in the telecoms sector. To foster competitive, resilient, inclusive and digital sovereignty, Europe needs regulation fit for the digital age that provides a level playing field. Deregulation of the telecoms sector needs to move forward and new rules for the digital world need to be put in place,” he said.

In this regard, he made several proposals for action that could help telecommunications companies now: banish the desire to raise money from the sector in operations such as spectrum auctions or 5G, renew competition policies to allow consolidation in the market and stop hindering European innovation in services.

“The telecommunications sector is essential and the time to act is now. I encourage regulators to be brave, to be bold, to forget traditional regulation and adopt regulation adapted to the digital world,” Álvarez-Pallete underlined in his farewell to the debate.