In a joint 5G collaboration project, Telenor and Telefónica are together demonstrating the E2E orchestration of 5G network slices using Open Source Mano (OSM) during MWC’19. 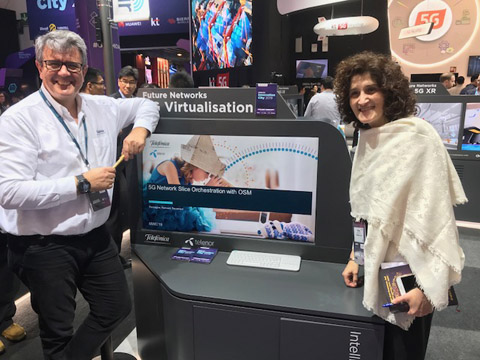 The joint demo, which is a first result of an ongoing common Proof of Concept, shows how slices with different characteristics can be created on demand across different domains in the mobile network including radio, core and transport, and how these slices are centrally managed afterwards from the OSM platform.

The demonstration leverages the capabilities of the Release FIVE of OSM to automate the deployment and operation of network services and network slices on demand based on replaceable components.

The demonstration shows first how a slice for enhanced Mobile Broadband (eMBB, that might apply for instance for future 360º video delivery) can be created on demand and, in turn, how a second slice for Ultra-reliable Low-latency Communications (URLLC, applicable to cases like real-time remote machine control) is created following the same procedure. Both Network Slices, which may serve different vertical industries as kind of optimized logical mobile networks, include their own mobile core network functions and cloudified radio network functions each. The demo also shows how such orchestrated operation is achieved even with network functions that are shared between both network slices.

“Network Service orchestration is a strategic network functionality enabling flexibility and automation when operating networks and serving customers. OSM as a community-driven project of high quality is critical to enable seamless vendor compatibility and higher agility with orchestration of network slices and network functions. This is of paramount importance when we move towards introducing 5G with the majority of traffic running over virtualized network functions,” says Ruza Sabanovic, CTO Telenor Group.

“5G networks will provide a plethora of business opportunities to the whole industry, but may also increase significantly the complexity of deploying and operating networks if we do not provide ourselves with a new generation of management and orchestration tooling. Automation is a must to cope with this challenge, and Network Service Orchestration is the missing piece to trigger this automation across a large set of technologies and networks. OSM has proven to be a solid implementation of a Network Service Orchestrator and has become a key piece for the evolution of UNICA program, the Telefónica program to virtualize the whole network and become 5G ready,” says Enrique Blanco, CTIO Telefónica Group.

The company has a significant presence in 16 countries and over 356 million accesses around the world. Telefónica has a strong presence in Spain, Europe and Latin America, where the company focuses an important part of its growth strategy. Telefónica is a 100% listed company and its shares are traded on the Spanish Stock Market and on those in London, New York, Lima, and Buenos Aires.

Telenor Group connects its 174 million customers to what matters most. Connecting the world has been Telenor’s domain for more than 160 years and we currently operate across Scandinavia and Asia. We are committed to responsible business conduct and driven by the ambition of empowering societies. For more information, visit www.telenor.com

ETSI OSM is an operator-led ETSI community that is delivering a production-quality open source Management and Orchestration (MANO) stack aligned with ETSI NFV Information Models and that meets the requirements of production NFV networks. The list of the OSM members and participants is available at: