Telefónica’s net income increased by 7.4%, reaching 837 million euros in the first quarter of the year

Telefónica’s net income increased by 7.4%, reaching 837 million euros in the first quarter of the year

“In the first quarter we advanced further in the execution of our strategic priorities set out for 2018. First, in connectivity we continued to grow our value accesses at a significant pace, which translated into higher average revenue and greater customer loyalty, associated with a continuously increasing demand for data and personalised offers.

Second, all our business units grew in revenues and OIBDA in organic terms, excluding the negative impact of regulation.

Third, we further strengthened our positioning as a platform Company by taking a step forward in our digital transformation, leveraging on digitalisation and data monetisation, and continue leading in innovation with the launch of Aura in 6 countries.

Furthermore, revenues, OIBDA and operating cash flow grew organically and net debt continued to decrease. This quarter’s results are in line with our expectations and allow us to reiterate our objectives set for the year.”

Telefónica today presented its results for the first quarter of the year, with an acceleration of organic growth, from revenues to operating cash flow (OIBDA-CapEx). The results of the quarter also show the efficiency in the allocation of resources and a strengthened balance, thanks to the reduction of debt (close to 10% year-on-year) and to a quarterly financing activity of more than € 10,000M.

Operating income before depreciation and amortisation (OIBDA) amounted to €3,864m in the first quarter (-3.9% y-o-y). In organic terms, OIBDA rose 3.3% y-o-y in the quarter, reflecting the positive revenue performance, efficiencies from the transformation process and digitalisation, and synergy capture. Excluding the impact of regulation (-2.2 p.p. in the quarter), OIBDA would have grown by 5.4% y-o-y in organic terms. OIBDA margin stood at 31.7%, with an expansion of 1.1 p.p. vs. January-March 2017 (+0.4 p.p. in organic terms).

It is important to note that reported variations of the January-March 2018 consolidated financial results reflected the adoption of IFRS 15 and 9 (the financial results in the same period of 2017 are reported under prior accounting standards). Organic variations excluded the impact of the accounting change to IFRS 15 in 2018 results (-€10m in revenues; +€11m in OIBDA). The accounting change to IFRS 9 had no significant impact on the results. 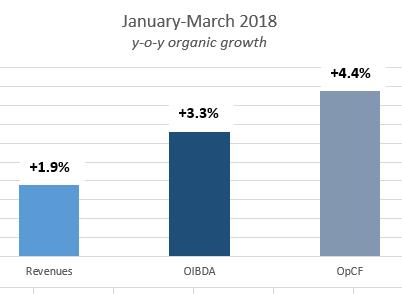 In this regard, net profit in January-March reached €837m, growing by 7.4% y-o-y, while basic earnings per share amounted to €0.12 in the first quarter.

CapEx in January-March 2018 stood at €1,490m (-8.0% reported y-o-y) and included €7m of spectrum in Argentina. In organic terms, CapEx increased by 1.5% and continued to focus on the deployment of UBB (ultra-broadband) networks, and the simplification and digitalisation of processes and systems. Operating cash flow (OIBDA-CapEx) totalled €2,374m (-1.1% y-o-y; +4.4% in organic terms reflecting the positive performance of the business and CapEx efficiency). Free cash flow before operations with minority shareholders amounted to €719m in the first quarter (+15.2% vs. the same period 2017) and free cash flow reached €550m (-8.7% y-o-y, due to an extraordinary dividend to Telxius shareholders of €166M). 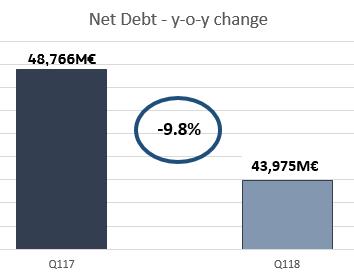 During the first quarter 2018, Telefónica’s financing activity amounted to approximately €10,692m equivalent (without considering the refinancing of commercial paper and short-term bank loans) and focused on maintaining a solid liquidity position, and refinancing and extending debt maturities (in an environment of low interest rates). Therefore, as of the end of March, the Group has covered debt maturities for the next two years. The average debt life stood at 9.11 years (vs. 8.08 years in December 2017).

Telefónica maintains its priority of building next-generation networks in order to provide excellent connectivity, including customer equipment to improve user experience. In 2018 UBB deployment accelerated with a boost in Hispam, where fibre/cable coverage extended to 7.5m premises passed (+50% y-o-y), in addition to the 19.7m and 18.6m passed premises in Spain and Brazil respectively. Overall, Telefónica reached 45.8m passed premises with fibre/cable (+15% y-o-y).

In this context, Telefónica has committed to a more interactive and digital customer-centric relationship model with the launch of a single application adapted to each operation. This application is one of the channels through which customers can access Aura, which has already been launched in six countries. 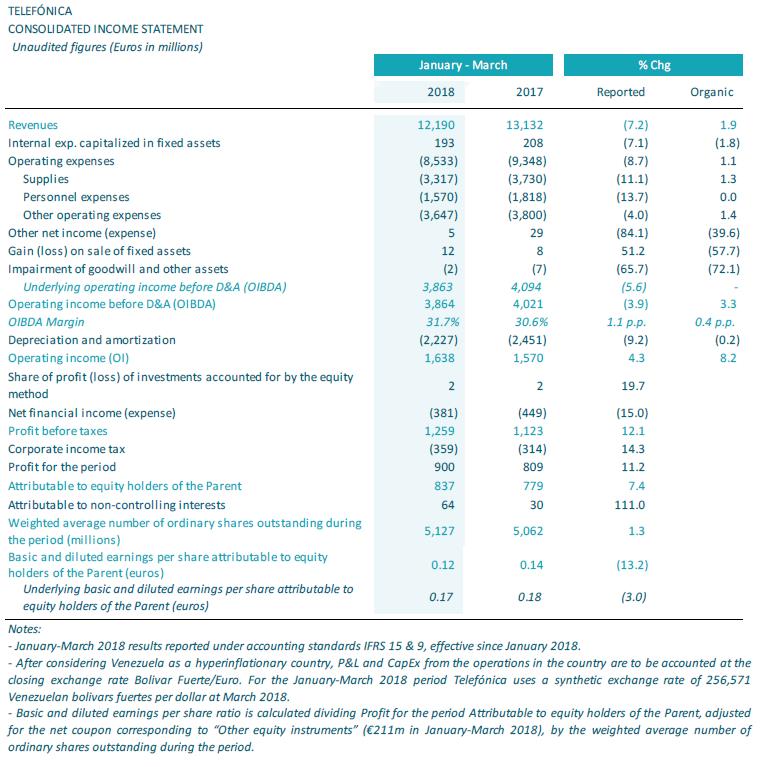 Telefónica España. In the first quarter of 2018, Telefónica España bolstered the y-o-y growth in service revenues (+0.8%) and OIBDA (+0.6%), as well as the increased value of its customer base. Particularly noteworthy was the sequential churn improvement observed across all services, in a market characterised this quarter by lower promotional activity and tariff upgrades implemented by the main market operators, centred on the “More for More” strategy.

Telefónica Deutschland. First quarter results came in on-track for full year guidance, with revenue trends further sequentially improving and sustained OIBDA growth on the back of successful synergy capture and a clear value-over-volume focus in a dynamic yet rational competitive environment. The company was ranked #2 in the Connect Mobile Hotline-Test.

CapEx (€197m) was 5.6% lower y-o-y benefiting from incremental CapEx synergies of ~€15m, while network integration, the subsequent LTE rollout and the strategy to bring fibre to the backhaul progressed according to plan. As such, Operating cash flow (OIBDA-CapEx) was up 7.1% y-o-y to €207m in the first quarter of 2018.

Telefónica UK. Telefónica UK continued to deliver solid results in the first quarter of 2018. As the UK’s leading mobile network carrier, the company continued to demonstrate the success of its customer-led, mobile-first strategy with sustained leading levels of loyalty and customer spend, as well as robust growth in financials, in spite of continued regulatory impacts and accounting adjustments.

CapEx amounted to €183m (-16.6% y-o-y) as ongoing network investments are phased throughout the year. In the period, Ofcom confirmed that the company’s LTE network has fulfilled the regulatory indoor population coverage obligation of 98%. Operating cash flow (OIBDA-CapEx) increased by 32.9% y-o-y in the period to reach €247m.

Telefónica Brasil. In the first quarter 2018, Telefónica Brasil maintained a solid y-o-y growth in revenues and OIBDA, translating into an OIBDA margin of 36.3% (the highest in the last 2 years). The company also maintained a solid commercial performance in contract LTE, Fibre and IPTV, allowing a continuous improvement in the quality of accesses.

CapEx amounted to €388m in the quarter (+16.5% y-o-y, as a result of phasing of investments throughout the year) and is mainly allocated to expanding fibre and 4G networks.  Operating cash flow stood at €594m, decreasing by 2.2% y-o-y. 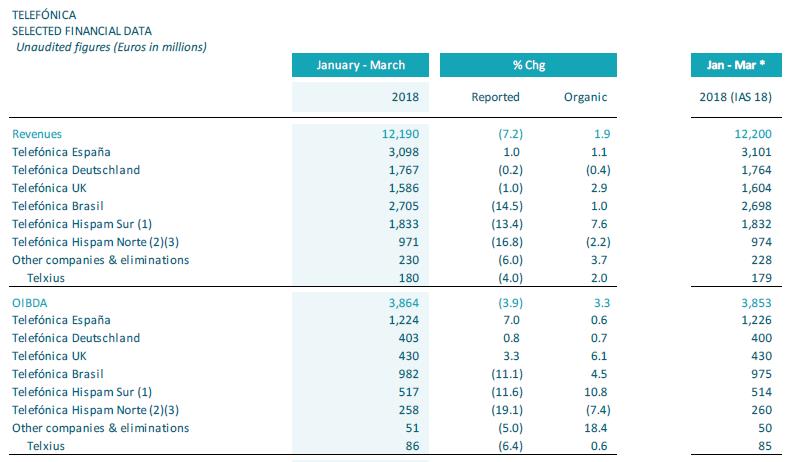 Telefónica Hispam Sur. T. Hispam Sur posted solid revenues and OIBDA y-o-y growth (+7.6% and +10.8%, respectively) led by a greater penetration of high-value services, tariff updates in Argentina and the favourable macroeconomic environment in the region, which more than offset the negative impact of the competitive intensity in Peru and Chile as well as the reduction of the interconnection rates in Peru.

Telefónica Hispam Norte. In the first quarter of 2018, the business continued to focus on capturing value customers, with growth in mobile contract accesses, LTE, smartphones, fixed broadband and pay TV. The y-o-y change in revenues and OIBDA was affected by the change in termination rates in Mexico. Nevertheless, this was partially offset by the positive performance of operations in Ecuador and Central America.

CapEx amounted to €53m in March (-54.2% y-o-y), and was mainly allocated towards improving and expanding fixed and mobile networks. Operating cash flow (OIBDA-CapEx) amounted to €205m in the quarter (+26.4% y-o-y).