Telefónica five-fold increase in its net income in 2021: 8,137 million euros

• Telefónica met the targets set for 2021, with a full year organic revenue and OIBDA growth of 2% and 1.4%, respectively, and a CapEx to sales ratio of 14.2%.
• The execution of the strategic plan announced in 2019 allows the company to advance in its transformation, grow sustainably, strengthen its financial position and to improve the efficient allocation of capital. Also allowed to develop its technological services in a financial year in which it five-fold increased its net income compared to 2020 and in which it continued to strengthen its networks.
• The company announces for 2022 a dividend of 0.30 euros in cash, with two tranches to be paid in December 2022 and June 2023, and it will propose to shareholders the cancellation of 2.41% of the capital.
• By 2022, the Group aims to achieve organic growth in revenues and OIBDA, as well as a CapEx to sales ratio of up to 15%.
• “Telefónica has once again delivered on all its targets in 2021. The strength of our results demonstrates the success of our strategic priorities and the achievement of our enhanced targets for the full year. Our company is today leaner, more efficient and stronger, with sustainability as an integral part of our daily business. In 2022 we continue to move towards the new Telefónica”, said José María Álvarez-Pallete, Chairman and CEO of the company.

Madrid, 24th February 2022. Telefónica obtained a net income of €8.137 million in 2021, a five-fold increase compared to the previous year. The Group closed the year with a balance sheet marked by the achievement of its financial targets and by the positive results derived from the execution of its main strategic lines, with a stronger position in key markets and a reduction in exposure in Latin America. In addition, Telefónica Tech firmly established itself as a key growth driver, increasing revenues by more than 30% in the year, and Telefónica Infra made progress in creating growth opportunities and crystallising value from infrastructure assets.

In 2021, the merger of O2 and Virgin Media to create a leading UK operator and the sale of Telxius towers at record multiples were successfully completed. These operations, which constitute two of the most important corporate transactions in the Group’s almost century-long history, stand out in a year in which the execution of the company’s strategic priorities has enabled it to advance in the transformation initiated in 2019, strengthen its financial position and make progress in its aim to be a leading company in connectivity and technological services in the new digital era. Most recently, Telefónica obtained authorisation to buy Oi’s mobile assets together with TIM and Claro, a deal that was launched last year.

Also noteworthy are the achievements made with regard to the digitalisation of the business operating model, with more than 80% of the processes already digitalised. All this without losing sight of the social dimension of the company. “The strength of our results in 2021 demonstrates the success of our strategic priorities and the achievement of our enhanced targets for the full year. We have reinforced our commitment to sustainability as an integral part of our daily business. We continue to drive fair and inclusive connectivity, leaving no one behind, delivering economic and social benefits, as well as playing a crucial role in decarbonising other sectors through digitalisation,” said Telefónica Chairman and CEO José María Álvarez-Pallete.

Growth and achievement of objectives

The company had set financial targets for 2021 for revenues, operating income before depreciation and amortisation (OIBDA) and CapEx to sales, and the figures obtained in the year show that these targets have been met. 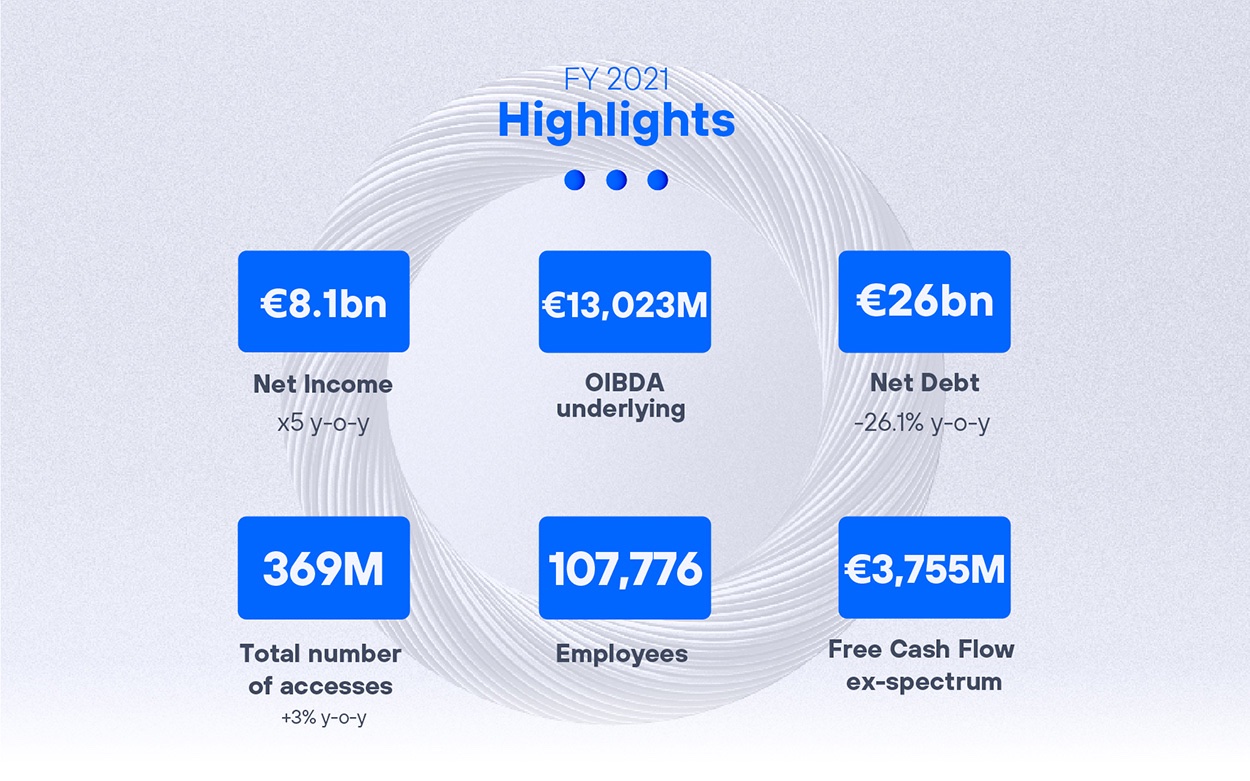 These increases have enabled Telefónica to meet the objectives set for 2021, which were improved in June and aimed to achieving revenue and OIBDA between stabilisation and slight organic growth. The objective was also to return to a normalised level of up to 15%, another goal that has been achieved, as it ended the year at 14.2%.

OIBDA grew 62.9% in the year to €21,983 million, thanks mainly to the capital gains obtained during the year (sale of the Telxius tower business and JV in the UK).

The results for the last quarter include restructuring provisions, mainly coming from the voluntary redundancy plan in Spain.

After the good performance achieved in 2021, Telefónica faces 2022 with new targets that follow the improvement registered last year. Specifically, the company has set targets to achieve low single-digit organic growth in both revenues and OIBDA, as well as a CapEx to sales ratio of up to 15%.

In addition, the company has announced a dividend of 0.30 euros in cash per share for 2022, payable in December 2022 and June 2023. The company will also propose the cancellation of 2,41% of the capital, corresponding to the company’s treasury shares. 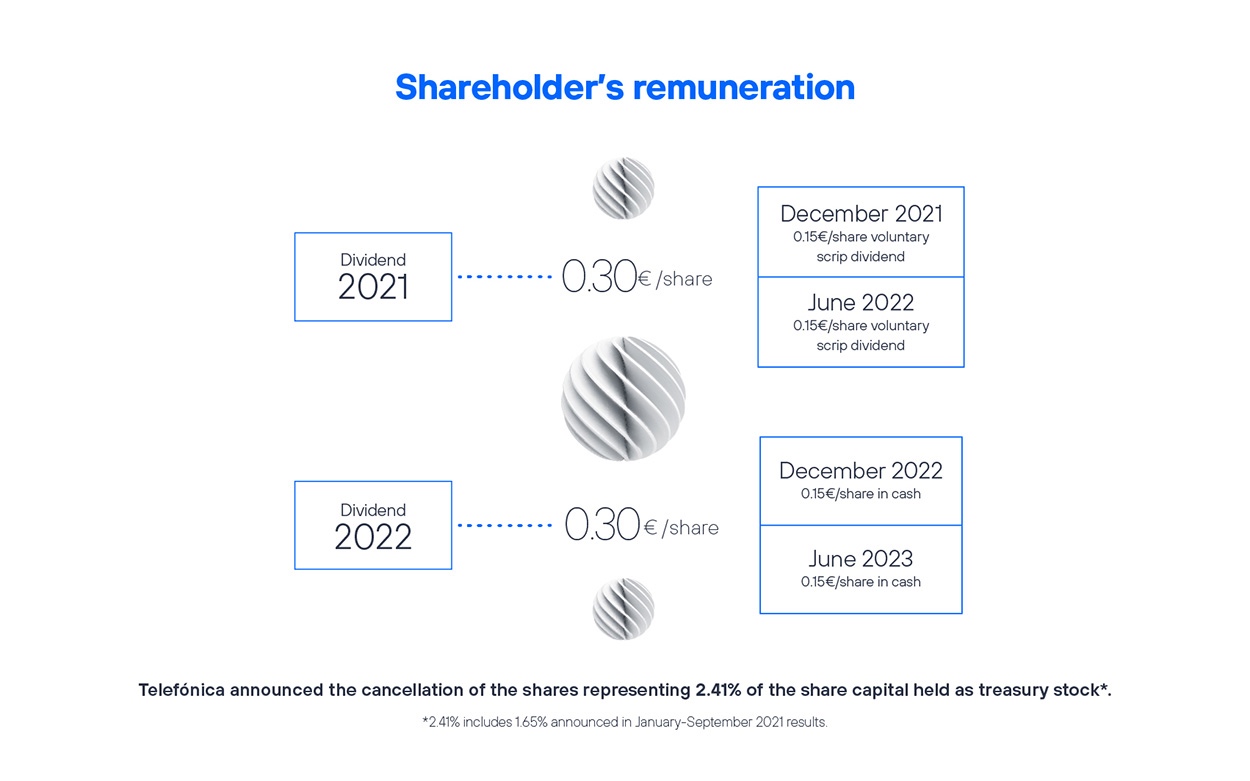 Telefónica continued to execute on its main strategic priorities in 2021. As a result, the company’s key businesses are in a stronger position thanks to the creation of the JV in the UK, the acquisition of Oi in Brazil, recently approved by the Brazilian competition authorities, and the acquisition of spectrum in the UK, Spain and Brazil. Germany also strengthened its competitive position during the year thanks to the improvement in the quality of its network.

The sale of the Costa Rica and El Salvador business, also during 2021, has helped to simplify Hispam’s asset portfolio. The implementation of a new operating model, the optimisation of investment and the higher volume of debt denominated in local currencies have contributed to reduce the capital employed in the region.

On the other hand, Telefónica Tech has accelerated its growth story for the company, with annual revenues up 33.6% to close to €1,000 million. This growth has even accelerated in the last part of the year, with revenues up 50.3% year-on-year to €346 million.

Telefónica Infra, whose main transaction in 2021 was the sale of Telxius’ tower business at record multiples, crystallising the value of the monetisation of these infrastructures, has also driven the creation of fibre vehicles in Germany and Brazil, which are already generating growth opportunities.

Telefónica’s cash flow generation accelerated in the fourth quarter. In this period, it reached €1,178 million, for a total of €2,648 million in the full year. Excluding spectrum payments, cash flow stood at €3,755 million in 2021.

In terms of management, the company refinanced a total of €6,667 million in the year, enabling it to maintain a solid liquidity position and extend maturities. Thus, at the end of 2021, maturities extend beyond 2024 and the average maturity of the debt stands at 13.6 years, compared to 10.7 years in 2020.

The open credit lines and cash position bring the liquidity level to a total of €24,586 million as of December 2021.

By December 2021, Telefónica had more than 159 million premises passed with ultrafast networks, 6% more than a year ago, and of which a total of 4,85 million pass through the company’s own network, 10% more than at the end of 2020. Fibre-to-the-home (FTTH) alone reached 55,8 million premises, with annual growth of 17%.

Precisely with the aim of providing the best connectivity and the best service to its customers, Telefónica has earmarked 45% of total investment in 2021 for new generation networks, mainly fibre and 5G, while seeking more inclusive connectivity through digitalisation.

Telefónica leads the world with its fibre optic deployment. The Group has the most extensive network in Europe, second only to China’s operators.

Sustainability in general and the SDGs in particular are an integral part of Telefónica’s day-to-day business. In terms of financing alone, the company already has a total of €3,250 million in bonds associated with sustainability objectives, with the intention of reaching financing of over €10,000 million in the coming years.

In environmental terms, Telefónica continues to focus on its commitment to energy efficiency, the closure of 1.448 copper plants since 2016, representing a total saving of 1,000 GWh, and the complete shutdown of the 3G network in Germany. It also contributes to the decarbonisation of the economy thanks to its Eco Rating scheme and EcoSmart label for companies.

In terms of social contribution, the Group continues to drive digitalisation, with more than 15.6 premises passed in the UK now connected at gigabit speed, and more than 13,485 rural communities connected through the ‘Internet for All’ project. Telefónica is part of recognised rankings, appearing in the Bloomberg Gender-Equality Index and is a leader in the World Benchmarking Alliance’s Digital Inclusion Benchmark (BID). With regard to the company’s governance, Telefónica has restructured its Board of Directors in 2021, which now has 15 members, nine of whom are independent. It has also increased the presence of women on its highest governing body to 33%.