Telefónica earns €1,026 million up to June and upgrades its financial targets for 2022

Telefónica reported solid results in the first half of 2022

Madrid, 28 July 2022. Telefónica reported solid results in the first half of 2022 in a context of high uncertainty in global markets. In the second quarter, the company accelerated growth in revenues and operating income before depreciation and amortisation (OIBDA), again with an increase in sales in all its markets, both in organic and reported terms. It also closed the half year with a cumulative net income of €1,026 million, a figure that stabilises the Group’s earnings after the extraordinary results from the operations closed in the first half of 2021. A year ago, net income exceeded €8,600 million after the €7,400 million from the extraordinary results after the creation of VMO2 in the UK together with Virgin Media and the sale of the Telxius towers.

In addition, the positive performance between April and June allows the company to further advance and upgrade its financial targets for revenues and OIBDA.

Telefónica also reiterates its shareholder remuneration policy for 2022, consisting of a full cash dividend of €0.30 per share, and announces that it will propose to the next AGM the cancellation of 0.4% of the share capital held as treasury stock at the end of June. 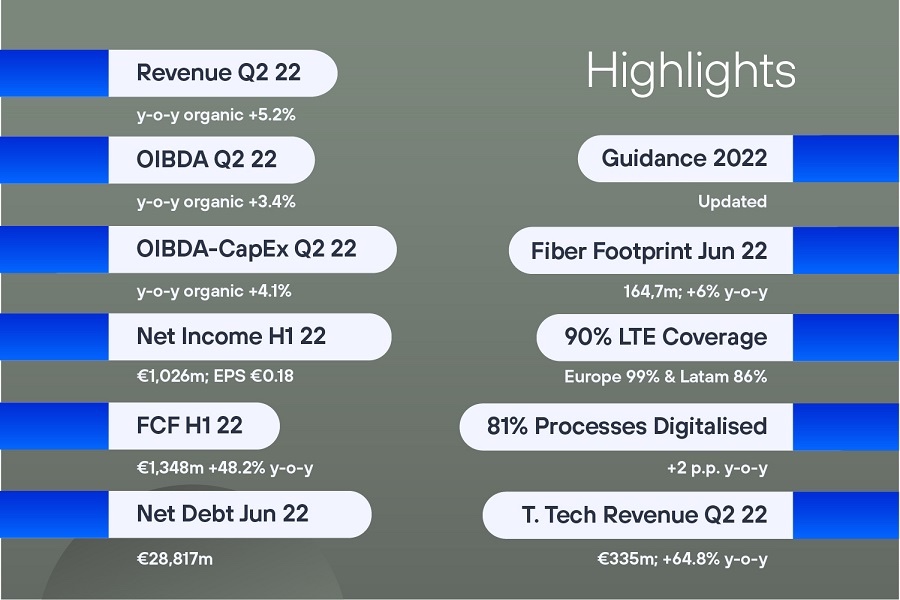 “The world is going through a period of economic weakness and it is now when Telefónica’s performance is even more valuable, with its solid fundamentals and results that exceed the targets and consolidate its profitable business, of quality and service to society,” said Telefónica’s Chairman, José María Álvarez-Pallete. He added: “Telefónica does not live out of touch of reality. The war in Ukraine, an energy crisis that complicates the inflationary scenario and higher financing costs have a direct impact on the lives of companies and individuals, without exception. Telefónica has its feet on the ground and is well aware that economic headwinds require determination, effort, intuition and leadership. This is the only way to explain Telefónica’s value creation, which successfully meets all its targets and confirms the dividend for 2022, without forgetting its commitment to zero net emissions. Telefónica is not immune to global uncertainties, but it is resilient enough to continue to offer confidence and stability to whatever challenges lie ahead”.

The positive evolution of the different figures in the first six months of 2022 is based on the consistent results in Telefónica’s main markets, a key element in the fulfilment of the strategic plan, together with the efficiencies derived from the operating model, the continued leadership process of Telefónica Tech and the capture of opportunities by Telefónica Infra. Strategic management has enabled us to cope with the current inflationary pressures and maintain the company’s solid fundamentals.

By countries, Spain’s average revenue per customer (ARPU) remained above €90 in the second quarter (+3.1% year-on-year) and the churn rate fell to 1.1%, the lowest level in six years. Also in the second quarter, the 5G rollout plans in Germany advanced ahead of expectations, and the integration of Oi’s mobile assets strengthened the Group’s leadership in Brazil, which increased revenues by almost 35% in the second quarter. In the UK, the company continued to innovate its catalogue of products and services and accelerated investments in network infrastructure to make VMO2 the leading operator in the UK market. At Hispam, the change in operating model led to a double digit increase in revenues (+18.4%) between April and June. 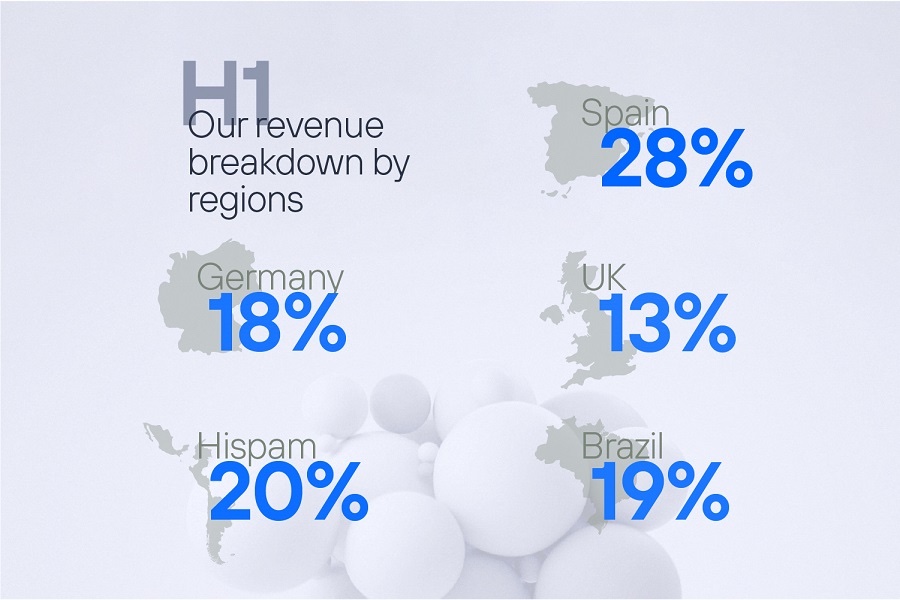 On the other hand, and in line with the first quarter, the favourable evolution of exchange rates had a positive impact on the reported figures of €526 million in revenues and €187 million in OIBDA (€768 million and €283 million in the first half, respectively).

Free cash flow in the quarter amounted to €835 million, rising to €1,348 million in the first half, 48% more than in the first six months of 2021. Worth noting is the €146 million dividend contribution in the first half from VMO2, part of the total figure of approximately €800 million expected for the full year.

CapEx through June amounted to €2,482 million, stable in organic terms and leading to a ratio of 13% of gross operating income, within the target for the full year.

Telefónica Tech’s revenues grew 64.8% in the quarter to €335 million, thanks to the performance of its businesses, which continue to outperform the market, and the integration of companies acquired in recent months, such as Incremental and BE-terna. Revenue growth between January and June was close to 72%, to €634 million.

Telefónica Cybersecurity & Cloud Tech and Telefonica IoT & Big Data Tech, the two areas that make up Telefonica Tech, also separately outperformed the market in revenues, growing by 73.7% and 59.4%, respectively, in the first half of the year.

Telefónica’s financing activity to June amounted to €7,392 million, enabling the Group to maintain a solid liquidity position of up to €20,603 million. In addition, the company has covered maturities beyond 2024, the average maturity of its debt is 12.8 years and close to 80% of the debt is anchored to historically low fixed rates. At 30 of June, net financial debt stood at €28,817 million. Considering post-closing events, the debt would be around €27,800 million.

In the second quarter, Telefónica met its goal of allocating more than €10,000 million to sustainable financing and announced a new target of around 25% of financing by 2024 to be sustainable.

Value customers and leadership in the deployment of ultrafast networks

In terms of ultrafast broadband network deployments, Telefónica continues to maintain its global leadership (excluding China), with 164.7 million premises passed, of which a total of 86 million pass through its own network (+9%).

In 5G technology, coverage is growing steadily, with a presence in more than 600 cities/towns across the UK, around 1,600 cities in Germany, 35 cities in Brazil and around 83% of the population of Spain covered.

Throughout the second quarter, Telefónica made progress in meeting ESG targets, aligned with the United Nations SDGs. In terms of environmental targets (E), the Solar360 JV now offers solar energy to residential and business customers and SBTi has validated Telefónica’s zero emissions target for 2040, the first telco to achieve it under the new standard. In addition, the company has implemented a platform that facilitates the reuse of equipment, both internally and with suppliers, aligned with the Circular Economy Plan that aims for Zero Waste by 2030.

In social terms (S), Telefónica has connected 2.5 million residents in remote areas of Peru with 4G technology under the ‘Internet for all’ programme. In addition, initiatives have been launched to promote digital inclusion (VMO2 has donated 10,000 smartphones in the United Kingdom). International Volunteer Day was also celebrated, with a total of 700 initiatives and the participation of 29,000 volunteers.

In terms of governance (G), it is worth to highlight the mentioned compliance with the sustainable financing objective, the diversity ratio on Vivo’s Board of Directors, which has increased from 25% to 33%, and the training on the Principles of Responsible Business for all the company’s employees.

One million people trained for the digital world

As part of the global Innovation and Talent Hub, and as a result of Telefónica’s commitment to promoting digital skills for society as a whole, Fundación Telefónica has trained almost one million people in the first half of 2022. In addition, as part of its aim to serve society and stand by the people who need it most, Telefónica has continued to carry out various initiatives to help the people of Ukraine.