Buendía Estudios is established, a production company of audiovisual contents in Spanish for the domestic and international market

The European Commission approves the operation between Telefónica and Atresmedia. Both groups have a 50% holding in the new company 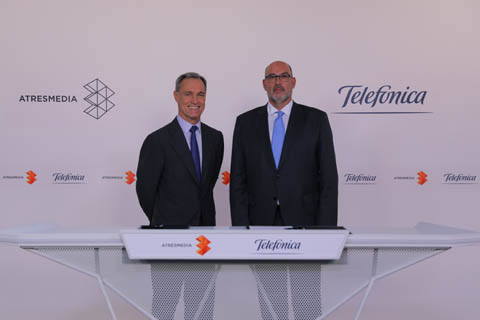 The European Commission approves the operation between Telefónica and Atresmedia. Both groups have a 50% holding in the new company

Madrid, 17 June 2020. This Wednesday, the European Commission has approved the creation of BUENDÍA ESTUDIOS. The new Company, the result of an agreement between TELEFÓNICA and ATRESMEDIA, will be aimed at creating and producing audiovisual contents in Spanish throughout the world. Both groups hold 50% of BUENDÍA ESTUDIOS. It is an unprecedented strategy, which will boost creation, talent and contents in Spanish.

BUENDÍA ESTUDIOS aims to boost Spanish and Latin American talent throughout the world. The new company will focus activity on domestic and international operators, thereby helping to revitalize the Spanish audiovisual sector and the independent production network of our country. This will be achieved by promoting associations and co-productions with other companies of the sector.

BUENDÍA ESTUDIOS will have the required infrastructure for the recurrent production of contents, generating a stable business environment for the development and creation of audiovisual projects. It will have a professional team with wide experience in the development and production of fiction, films and entertainment for the market. Its associates already include Movistar+, Atresmedia, Amazon, Netflix, Warner – HBO, TNT, HBO Max-, Orange y Regional Channels.

With the creation of  BUENDÍA ESTUDIOS, TELEFÓNICA and ATRESMEDIA join talent and further their creation of contents business, in an increasingly more global market. The strategic goals of this studio are to compete on Spanish, Latin American and Hispanic US markets.

In this way, the operation culminates in an Alliance between two of the benchmark factories in the world of Spanish fiction. ATRESMEDIA has for years been famous in domestic and international audiences and markets. It has created highly successful series and films of different countries. It has achieved some of the greatest awards of global prestige, such as the Emmy award. Series such as “Money Heist”, “Locked Up”, “The Time in Between”, ‘Velvet’, ‘Gran Hotel’, ‘El internado’, ‘El Secreto de Puente Viejo’… and successful feature films, produced by ATRESMEDIA CINE, such as  ‘Marshland,  ‘The Invisible Guest’, ‘The Realm’, ‘Mirage’ or ‘Palm Trees in the snow’, highlight the incredible value of ATRESMEDIA in Spanish fiction at global level. In 2019, ´Klaus´ won a Bafta for the best animated film and was nominated for the Oscar and Goya awards. ‘Father there is only one’ was the highest-grossing film of 2020.  ´Malasaña´ was successfully released, and very soon ´Superagente Makey´ (17 July), ‘Father there is only one’ (2) (7 August) and ´El verano que vivimos´(October) will be released.

For its part, through MOVISTAR+, TELEFÓNICA has developed original production of Spanish fiction in the entertainment market, with a differentiating and daring proposal of value. A commitment to Spanish talent and series which claim their own identity. A model created from the vision of the creator and which has kept its commitment to Movistar customers, with the release of 12 projects a year.  ‘The Plague’’ by Alberto Rodríguez and Rafa Cobos, ‘Mira lo que has hecho’ by Berto Romero, ‘Vergüenza’ by Juan Cavestany and Álvaro Fernández Armero. Blockbusters like ‘La Unidad’, ‘La Línea Invisible’, ‘Arde Madrid’ by Paco León and ‘Vida Perfecta’ by Leticia Dolera have been recognized by the domestic and international industry. Co-production projects, such as ‘Hierro’ and ‘En el Corredor de la Muerte’, and ‘El Embarcadero’, a project by Alex Pina and Esther Martínez Lobato, developed by ATRESMEDIA Studios for Movistar+, plus its first original film, ‘While at War’, by Alejandro Amenábar. Telefónica hence reinforces its capacity as a creator of original fiction contents, and its extensive multi-platform scope, to position its original production in Spanish on the global market.