With this issue of the Magazine , we focus on the application of competition policy in our industry, for a better understanding of the criteria followed by the authorities to solve the... 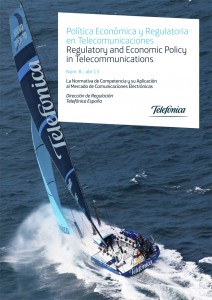 With this issue of the Magazine, we focus on the application of competition policy in our industry, for a better understanding of the criteria followed by the authorities to solve the competition conflicts. We also review the economic principles that have inspired different decisions and we explain the most controversial points that need a greater attention, especially by responsible for developing the competition policy.

In the first section we review the underlying economic principles of competition law and the analysis of anticompetitive behavior. Faced with the mainstream theory about the dominant position in a market, Dr. Fernando Herrera González  (Regulation Unit of Telefónica España) proposes an alternative vision based on understanding of competition process, instead of doing as a state.

Juan Delgado Urdanibia, Senior Advisor in The Brattle Group, in his article, argues that the regulatory and competition policies are more effective when they address explicitly situations that affect substantially consumer welfare.

For their part, Jorge Padilla and Elena Zoido, Senior Managing Director and Senior Vice President, respectively, of Compass Lexecon Europe put the focus of their article on the methodology used by the authorities to determine the circumstances under which a price can be considered predatory and / or excessive, issue that has not been without controversy. The authors point out that the investigations have given rise to a range of methodologies aimed at testing the existence of a “margin squeeze”.

Germán González and Juan Carlos Huertas, from Economic Regulation Unit of Telefónica España, provide arguments to consider price discrimination as a tool to adjust demand and supply, in order to achieve higher levels of efficiency in the market and to transform the goods into more accessible for broader populations. Additionally, price discrimination has the effect of encouraging investment and innovation, which increases the market dynamic efficiency.

The final part of this issue of the Review it is dedicated to the difficulties presented on the implementation of competition analysis in the electronic communications markets so far. From the perspective of regulation and competitive policy it is capital the coordination required between the authorities without which it is not possible to provide legal certainty to operators and others market stakeholders.

Gaspar Ariño and Juan Miguel de la Cuétara, Professors and Partners at Ariño y Villar Abogados, criticize the adoption of solutions like the announced recently by the Spanish government, this is the merging of sector regulators and competition authority. The authors state that these institutions are not mere interchanging administrative agencies subjected to the government changes.

Stefano Fratta, Head of Corporate and Legal Affairs of Telefónica Digital, and Fréderic Louis, Partner of  Regulatory and Government Affairs Department de WilmerHale, dedicate their article to the horizontal agreements and the collusion in electronic communications markets. Specifically, they focus in the retail mobile markets, which have been traditionally regarded as prone to tacit collusion.

Daniel Escoda and Paz Barros, Lawyers at Telefónica España, explain that the “As Efficient Competitor Test” is a Competition Law tool used for verifying whether a conduct is anticompetitive by exclusively, analyzing the costs and prices of the dominant undertaking.

You can access to the new number of the Telefónica’s magazine here.