• Telefónica's General Shareholders' Meeting has approved all ten proposed resolutions on the agenda, including approval of the annual accounts for 2021, the return to cash dividend, a capital reduction of 2.41%, and the directors’ remuneration.
• José María Abril Pérez, Ángel Vilá Boix, María Luisa García Blanco and Francisco Javier de Paz Mancho have been re-elected as directors of the company, and María Rotondo Urcola’s appointment has been ratified.
• "Telefónica is a different company today from the one it was six years ago. A company that has prepared itself for a new world. Everything is going to change again. And all of this will happen in our networks," said Telefónica's Chairman & CEO, José María Álvarez-Pallete, during his speech to shareholders. • Álvarez-Pallete assures that society is witnessing the "birth of a new era" and that "the world of radical globalisation has disappeared", but he is convinced that "we can move towards a better world, which will require the best of us to make it right". 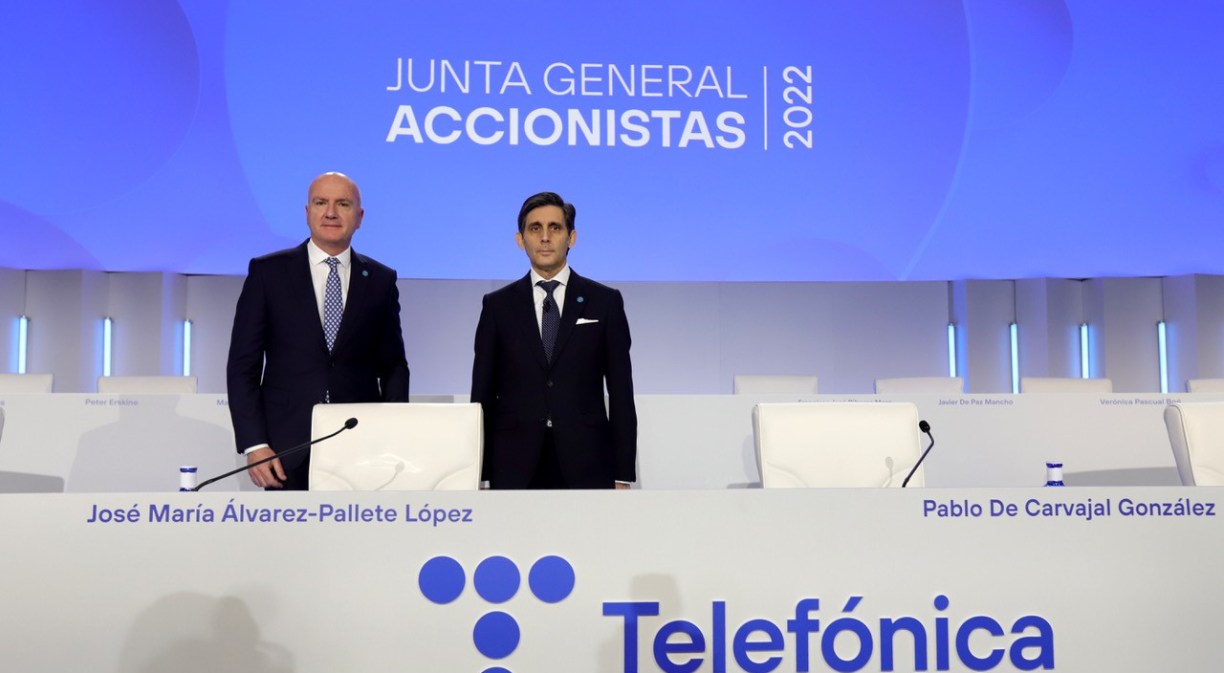 The General Shareholders’ Meeting of Telefónica, held today in a hybrid format with attendance both in person at Distrito Telefónica HQ and via telematic participation, has approved all the proposed resolutions on the agenda. The shareholders have endorsed the management and the company’s achievements in 2021, a year in which Telefónica has met all its objectives.

Telefónica fulfilled its financial targets in 2021, with sustainable growth in revenues and operating income before depreciation and amortisation (OIBDA). In addition, it achieved a net income of more than €8 billion, five times higher than in 2020, and a cash generation of close to €3.8 billion.

The company also delivered on corporate transactions. In 2021 Telefónica closed the sale of the Telxius towers to American Tower at record multiples and the merger of O2 and Virgin Media in the UK, a transaction that creates a leading operator in the UK market.

These transactions, together with a strong cash generation, have enabled Telefónica to reduce its financial debt to €26,000 million, half of what it was in 2016, and to double the company’ shareholder’s equity.

Telefónica also fulfilled its strategic plan, which is enabling the transformation of the Group and reinforcing the solidity, agility and efficiency of the company. Another key area of achievement was the sustainable objectives, with milestones such as the increase in the presence of women on the Board of Directors to 33%, and with measures that reinforce Telefónica sustainability in its aim to reach net zero emissions in its main markets by 2025.

The company also delivered for shareholders, with a total return of 29.6% in 2021, including a nearly 19% increase of Telefónica shares on the stock market, well above last year’s performance of the sector and the Ibex 35.

These achievements were reflected in the proposed resolutions submitted to the AGM, which approved all of them. Of particular note is the agreement to return to the full cash dividend, which will be reinstated with the distribution of 0.15 euros in December 2022.

This authorisation is in addition to the majority support for the other proposals, which included the approval of the 2021 annual accounts, the capital reduction of 2.41% and the directors’ remuneration.

The AGM also supported the re-election of José María Abril Pérez, Ángel Vilá Boix, María Luisa García Blanco and Francisco Javier de Paz Mancho as members of the Board of Directors for an additional four years. The shareholders also ratified the appointment of María Rotondo Urcola as director. At the same time, the AGM was in favour of setting the number of Board members at 15.

“Our life has changed, and the change is irreversible”.

During his speech to shareholders, José María Álvarez-Pallete reflected on the “extraordinary times” occurred in recent years, with Brexit, the pandemic and the war in Ukraine as main examples, giving rise to the “dawning of a new era”. “Our life has changed, and the change is now irreversible,” he said.

“That world that is gone and will not return”, he pointed out, has an inescapable consequence: “The world of radical globalisation has disappeared”.

“We are being tribalised by machines”.

Alongside these three events, the Chairman & CEO of Telefónica also warned of the dangers arising from the emergence of post-truth. “The Internet, social networks, platforms and devices have changed the way we engage with each other, the way we inform ourselves, who we give credibility to, who we believe is telling us the truth or the truth we want to believe,” he said.

“We are witnessing an attack on Truth, the cornerstone of our coexistence”, he warned in reference to the impact that algorithms and new information formats are having on society. “We are being tribalised and it is machines that are doing that”, he denounced.

“A better world based on people and humanist values”.

Faced with this reality, Álvarez-Pallete has launched a message of hope: “We can miss the world that has gone, but we must also aspire to a better world. We can move towards a better world”.

To this end, he defended the decisive role of people. “When post-truth comes to challenge the pillars of our coexistence and algorithms want to take control of what we think or want, people emerge”, he emphasised. “It is we, the people, who decide the values we want to share and defend”, he said. And also added: “We are living through the greatest era of change in the human history and the greatest accumulation of technology of any generation ever. We have to channel this technology to put it at the service of people and help us to solve problems that have been unsolvable until now”.

He also stressed the importance of values: “As a society we must build something better on what we left behind, build it on solid values, build it on humanist values”, said the Chairman & CEO of Telefónica.

“Telecoms are a gateway to the future”.

During his speech, he also expressed his conviction that Telefónica is facing the challenges and opportunities of the emerging new era well prepared and from a position of strength. “The telco sector is not just another sector. It is a gateway to the future”, he said. And he continued: “The real revolution is coming, and that is the arrival of artificial intelligence. It has just begun, and it is not going to stop here. We can already see the arrival of the combination of the internet, artificial intelligence, and web 3. This will lead to the metaverse, where we will move from a 2D internet to a 3D one”.

Álvarez-Pallete highlighted the fundamental role that Telefónica will play in this new era: “Everything is going to change again. And all this will happen in our networks. We are essential. Telefónica has a responsibility to participate. This whole new world is passing through our networks, and we are witnessing happen”.

This leading role is possible thanks to the transformation made by the company in recent years. “Telefónica is a different company today from the one it was six years ago. A company that has prepared itself for a new world. A company that feels capable and legitimised to contribute to defining the rules that should govern this new era”, he said.

“This transformation is not done alone, it is done by the people who are part of this great company”, he acknowledged. This contribution has been one of the hallmarks of the company since it was founded in 1924, as José María Álvarez-Pallete pointed out: “Telefónica will continue to change and will continue to be relevant. We are approaching our centenary with the best team, with the enthusiasm, freshness and healthy ambition of those Telefónica people who imagined the future and built it”.