The RAE (Royal Spanish Academy) and Telefónica are taking a further step in their cooperation in artificial intelligence (AI) within the framework of the LEIA (Spanish Language and Artificial Intelligence) project presented in 2019. 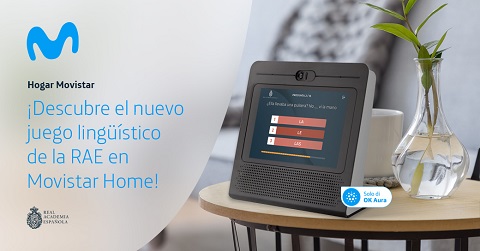 Madrid, 22 December 2020.- The RAE (Royal Spanish Academy) and Telefónica are taking a further step in their cooperation in artificial intelligence (AI) within the framework of the LEIA (Spanish Language and Artificial Intelligence) project presented in 2019. One of the LEIA’s chief objectives is to promote greater and better use of the Spanish language in the digital world, particularly in the field of Artificial Intelligence.

To this effect, they have launched two initial projects. The first consists of a set of linguistic challenges that put people’s knowledge of Spanish to the test. These include language games for users of Movistar Home, the device that facilitates and extends its users’ relationship with the company’s services and includes Aura, Telefónica’s virtual assistant with artificial intelligence.

Movistar Home already provides the first of these linguistic challenges with varied questions on the use of Spanish (spelling, grammar, vocabulary, etc.), during which users can demonstrate their knowledge of the language. Is it quizá or quizás (maybe) or are they both correct? When someone falls, do we write se cayó or se calló?  By means of these and other questions and a recreational, didactic and dynamic interface, the RAE and Telefónica encourage users to reinforce their language skills with ease. This challenge can also be viewed on the RAE’s language portal at www.rae.es and will soon become available on Movistar+ via a Living App, as the platform’s television applications are known.

This type of challenge is just one example of the cooperation between the RAE and Telefónica within the LEIA project, which covers several lines of work seeking to ensure that speakers improve and perfect their Spanish, but also that machines make proper use of the language, in such a way that the achievements of the RAE throughout its 300 years of existence are not impaired.

The second project that brings the RAE and Telefónica together involves the universities. The aims are to promote research, accelerate the technological ecosystem in the academic field and involve students and any researchers who may be interested in the breakthroughs related to language and artificial intelligence while welcoming and capitalising on all the ideas that arise within this environment. The partnership with the University is channelled through proposals for end-of-master’s-degree projects (TFMs) and their supervision.

Within this framework, one of the first initiatives that’s being conducted is the collaboration of the RAE and Telefónica with the master’s degree titled Letras Digitales: Estudios Avanzados en Textualidades Electrónicas on offer at the Faculties of Computer Science and Philology of the Complutense University of Madrid (UCM). Within this initiative several TFMs related to the Spanish language and artificial intelligence have already been set in motion with tutors from departments related to linguistics, computer science and computational linguistics. The RAE and Telefónica are responsible for supervising and monitoring the entire process. These projects are specifically designed for philologists specialising in grammar and spelling, lexicologists, computational linguists and data engineers.

They address fundamental issues such as punctuation, loísmo, laísmo and leísmo (difficulties with object pronouns) and the analysis of dictionary queries. In addition to the technical aspects, they seek to answer questions of general interest such as what the most frequently asked questions are, what spelling mistakes are made most often, and if it’s possible to give an automatic answer when we aren’t sure whether to use le, lo or la.

One of the main goals of these projects is to develop automation systems with which the RAE can work on classifying and maximising the use of all the information it has in order to apply it to AI, with the idea of ensuring proper use of the Spanish language in machines and creating tools that encourage the correct use of Spanish in humans, in keeping with the spirit of the LEIA. The students will submit their results in the course of 2021.