Telefónica contributes 1.8% to the Spanish GDP and pays 22 euros in taxes for every 100 in revenues

50% of the variable remuneration of Telefónica’s employees is directly related to different customer metrics, the priority of the company, which stands at number one within... 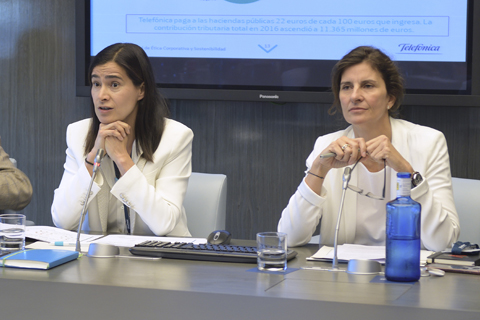 Madrid, 7 June 2017.– Today in Madrid, Laura Abasolo, Director of Planning, Budgets and Control at Telefónica, and Elena Valderrábano, Director of Corporate Ethics and Sustainability, presented the company’s Integrated Report corresponding to 2016, which includes the most relevant parameters for its strategy in all the countries in which it operates, as well as the challenges for 2017.

For the second successive year Telefónica has chosen this model of reporting to the market, which encompasses a joint strategic vision with cohesiveness between financial and non-financial aspects, enabling better understanding of the company’s entire ecosystem.

Elena Valderrábano reviewed the major trends and challenges that society as a whole will have to face in the short term: demographic growth and urban development, customer empowerment, the reinvention of the labour world, the scarcity of resources and climate change.

Meanwhile, the explosion of data, the speed and ubiquity of connectivity and the improvements in computing efficiency are leading us to a new technological paradigm which could even trigger a new growth cycle. At the same time, these advances are generating social challenges which need to be addressed – data privacy and security, potential social inequalities, ethical dilemmas, employment instability and so on. The telecommunications sector is at the centre of this revolution, as a facilitator of profound changes in the economy and society, chiefly linked to the irruption of artificial intelligence.

Telefónica has created a Sustainable Business Advisory Panel, made up of experts from different fields, whose purpose is to analyse the impact of all the above trends, in such a way that the company can better understand the expectations of customers, employees, suppliers, investors and society in general.

These challenges, as José María Álvarez-Pallete, Chairman and President of Telefónica, explains in the introduction to the Integrated Report, “can also provide an opportunity to make a more sustainable digital society, if we do so in accordance with our values. We want to give our clients the opportunity to choose the products and services which will help them to improve their lives in an integrated, transparent and committed manner.”

“Our goal is to put technology at the service of people, giving customers control over their digital lives,” declares Álvarez-Pallete. “In relation to the inequality which may be generated by the new technologies, we want to promote and ensure access to them, giving our customers and society in general, the opportunity to choose the most advanced technology and the most innovative services in a secure and high-quality fashion”.